Whiskey Review: The Lakes Distillery The One 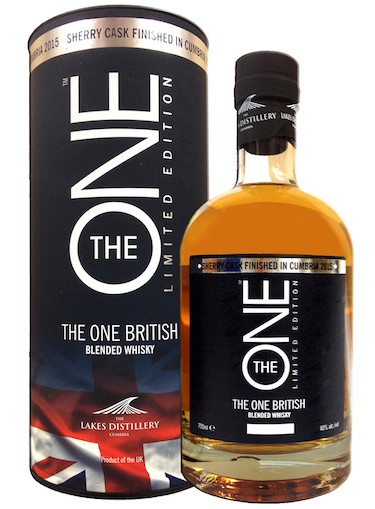 The One: Is that not perhaps what we’re all looking for, in some form or another? Whether it be a pastrami sandwich, a life partner, the one reason to do what we do when we finally do it, or, if nothing else, a whiskey?

Currently, all I have is the latter—the first British Isles blended whisky, The One. Which, believe me, is quite enough, because this One is a special one: bottle #1,683 of a limited release of only 3,335. What makes this One stand out from the Lakes Distillery’s other Ones? Well, this One has been gently finished in oloroso seasoned sherry casks from Spain, lacing it with flavors of “dried fruits and spices.”

The One is the love child of Paul Currie, son of Harold Currie, the founder of Arran Distillery, the lone distillery of the Isle of Arran. However, instead of finding another isle to conquer, they moved inland, specifically Cumbria in the lakes district (hence the rather obvious name, the Lakes Distillery). It is a beautiful, rugged land in the Northwest of England, a place where Beatrix Potter, the beloved children’s author, and William Wordsworth, the 18th century poet, went for inspiration and relaxation.

The distillery, opened in December of 2014, resides in a renovated 1850s Victorian model farm. Alongside the history, the romantic ideal, and the bucolic setting, this, rather bittersweetly, is a 21st century operation. It’s obvious from their website that they’ve put a lot of money into the old farm, and it seems to be a drinker’s Disneyland as much as anything else. Their first single malt will be available in 2018. Besides whisky, they also distill gin and vodka. There is a bistro, and, of course, a blog. There are hats, bags, blankets, miniature gift packs, whisky clubs, and live webcams. And there is even a book, Faith, Hope, Luck and Love, chronicling the renovation and completion of the distillery.

But so what? Who am I to criticize if I’ve not sipped a sweet dram? Just some Yank with an opinion—and there are plenty of us around, aren’t there? So, let’s turn to the light honey-colored elixir to sip and conclude what we can. Because, honestly, isn’t that all that matters? What’s in your glass, who you’re with?

Nose: Buttered almonds and toffee. Dried rose petal via a Christmas potpourri. Though go easy on the inhale, it can be a bit hot if one is a bit overzealous.

Finish: Long, sweet and smoky, with waves of burned caramel.

There is an old Gin Blossom’s song, Cheatin’, with a line that goes, “You can’t call it cheatin’ because she reminds me of you.” And that’s how I feel about the Lakes Distillery The One. It would not be my first choice. But then, I am not partial to smoke and peat, regardless how supple and well balanced. Call it a character flaw. I know many have.

However, knowing The One is distinctly outside my normal dram, it is close enough that I’d gladly “cheat with it” any time I could. And, if you like your whisky mildly smoky and peaty, forget cheating and buy yourself a bottle, or two, or three, because this, like so much in life, is a limited edition.

FINAL SCORE: 84/100 [SHOP FOR A BOTTLE OF THE LAKES DISTILLERY THE ONE]

159
Shares
655
Views
Share on FacebookShare on TwitterGet Our Newsletter
Cheers to the Dads! Personalize a bottle of his favorite whiskey to create a modern gift for the modern man. Use code: FATHERSDAY20 for $20 off your next order of $100 or more at ReserveBar