Whisky From Beyond The Arctic Circle Surfaces Out Of Norway

The Aurora Spirit out of Norway holds a very unique place in the distilling industry in that it is said to currently be the world’s northernmost distillery, situated “far beyond the Arctic Circle.” Its spirits are typically based on local herbs, berries, melted glacier water and, in the case of its first whisky, Nordic barley. This whisky, called Bivrost Niflheim, is now coming to market.

The new Bivrost Niflheim Single Malt Whisky, according to those behind it, was distilled from Nordic barley, pilsner malt and brewer’s yeast. Water for it was sourced from a local spring which gets melted glacier water from the nearby Lyngen alpine range. Maturation occurs in a mix of sherry casks, virgin oak and bourbon casks, all of which rest in underground storage vaults that were previously part of a network of tunnels in a Cold War NATO base (the distillery is housed also on this former base).

Digging down into the production process of this whisky, it is noted by the distillery that, owing to the Arctic temperatures, aging typically happens in “relatively small casks for faster maturation.” Also, the tunnels these casks are being aged in reportedly reduce evaporation rates, thus lowering the angel’s share. 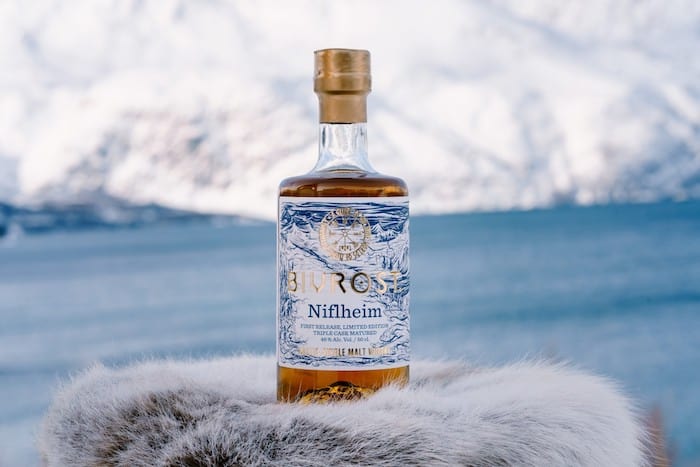 “Now that the Bivrost Nifilheim Whisky is ready to be released,” said whisky author Blair Bowman in a prepared statement, “I’m incredibly excited for others to get a chance to taste whisky from the most northerly whisky distillery in the world!

“An incredible achievement for a group of friends who were inspired to build their own distillery in the Arctic Circle after a trip to Islay in Scotland. This whisky really shows their dedication to the quality of the ingredients, the distillation and maturation.”

As it stands now plans call for the Bivrost single malt releases, of which Niflheim is the first, to be two limited edition offerings each year until Aurora eventually scales up sales of the whisky as a whole. Niflheim is bottled at 46% ABV and prices around €70, or about $75 USD. It will initially be available in Norway, Sweden, Germany, and the UK.

Official tasting notes are as follows.