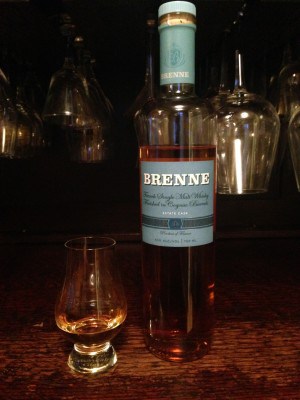 As whiskey drinkers become more curious, producers outside the borders of the Big Three (Scotland, Canada, and the United States) are starting to make major strides. Japan has been raking in awards for years, and the World Whiskies Awards’ recent selection of Taiwan’s Kavalan Soloist Vinho Barrique Single Cask Strength as top single malt underscores that there’s great stuff coming from all corners. So why not France?

Whisky isn’t the first thing that springs to mind when I think of France, but perhaps it should be. France drinks more blended Scotch than any other country in the world, and it’s no slouch when it comes to malt whisky, either. While there are a double-fistful of distilleries in France producing whisky, very few of them seem to make the trip over the Atlantic, perhaps due to the voracious hunger for the spirit in France. (Santé!)

Brenne is one of the few French whiskies (alongside Armorik from Warenghem Distillery and Bastille from Daucourt Distillery) reaching for the U.S. market. Brenne Single Malt is sourced from a producer in Cognac, France and was originally the idea of Allison Patel and her husband Nital. The spirit is made from grain grown on the distiller’s farm, and twice-distilled on classic copper alembic Cognac stills. Though Brenne Single Malt doesn’t carry an age statement, the brand’s website says it’s aged about seven years: five in Limousin oak barrels, and then – in a unique twist – it’s finished for two years in used Cognac barrels.

Brenne recently released a 10 year expression, which we wrote about earlier this fall. All of Brenne’s non-age stated releases are single barrel releases; mine came from barrel no. 262, and was bottled at 40 proof. Retail pricing runs around $55.

Appearance: Clear gold with a warm cast. Relatively thin in the glass.

Nose: Candy-sweet and ester-dominated with explosive notes of banana, bubblegum, clove, and tropical fruit. Reminiscent of a yeasty homebrewed Hefeweizen.

Palate: The sweetness continues with prominent coconut, banana, and bubblegum flavors in the entry. Canned fruit cocktail in the mid-palate is followed by a slightly drier, warming finish, underscored with a modest hint of oak spice. Overall, the palate is very soft and liqueur-like, without a lot of richness or structure.

The lasting impression left by Brenne is one of intense but somehow spare sweetness, much more reminiscent of aspartame than brown sugar or caramel. There are some intriguing tropical fruit notes to explore and the oak-influenced portions of the finish are quite pleasant, but I can’t get past the cloying banana-bubblegum flavor and aroma.

Its light, candy-like flavor might make Brenne a good bridge spirit for drinkers moving into whisky, but those qualities made it a challenge for my palate. While I credit Brenne for producing such a unique style of malt, ultimately it’s not for me. But, if you’ve got a sweet tooth, it might be for you.

I give the Brenne Single Malt Whisky a score of 78 points. Should you want to track down a bottle of it you can view a list of online retailers selling it here.