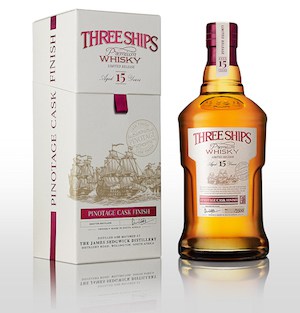 As we wrote about a few months ago, South Africa is one of the whisky making regions of the world that’s not on most people’s radar. Most South African releases are on the young side. In fact, what’s being called the oldest whisky to date launched in South African history has just been released at 15 years old, after a finishing period in ex-Pinotage wine casks.

The new Three Ships 15-Year-Old Pinotage Cask Finish, according to the distillery behind it, first had its grain and malt components matured separately in American oak casks before being finished for different periods in eight casks previously used for Pinotage. This wine type, for those unfamiliar with it, is a South African invention that’s pinot noir and Cinsaut (Hermitage). There’s no mention of how long it was finished for this way, but what is noted is that the wine casks

[I]mparted the typical Pinotage varietal character of red berry fruit and a slight earthiness to the whisky which softens the malt component and complements the sweetness of the grain. With a red berry tinge, the whisky is light in style with prominent cherry, plum, tropical fruit and the typical Pinotage earthy notes on the nose. The palate is clean with hints of the banana and pineapple ending with a lingering warm finish.

Around 3,500 bottles of this whisky, bottled at 46.2% ABV, have been released in the South African market for purchase, priced around $105 USD each. There’s no word on whether it will be available for acquisition at some point outside of that region.

Shares
453
Views
Share on FacebookShare on TwitterGet Our Newsletter
Get Jefferson's Ocean at ReserveBar. Shop now!