Sullivans Cove Distillery, a Tasmanian producer of malt whiskies whose French Oak single malt was named World’s Best Malt Whisky by Whisky Magazine back in 2014, has released the first two expressions from a range they’re calling the “oldest and rarest” not just of their whiskies, but from any Australian distillery.

The distillery is now placing the “Old & Rare” designation on whiskies aged for sixteen years or more. “The vast majority of our whiskies reach their peak at around 10-12 years,” the distillery announced in a press release, “but every once in a while, our skilled distillers identify a cask with the specific characteristics that allow for extended maturation.” According to the announcement, Sullivans Cove is the only Australian distillery “that has been consistently using full-sized casks for over 20 years.” 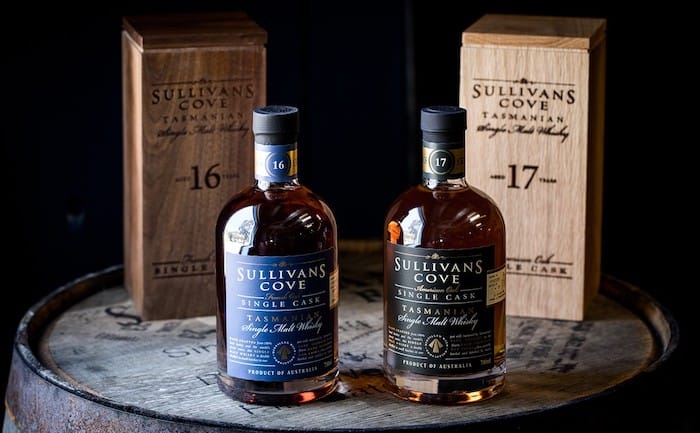 The first two expressions with this label are a 17-year-old American oak-aged single malt, and a 16-year-old French oak-aged single malt. Both whiskies are labeled with their barrel numbers, HH0317 and HH0520, respectively. “It’s a great feeling to see some of the earliest spirit we distilled and barrelled [sic] mature into the whiskies they are now today. Finally, being able to bottle them is like seeing your first born graduate from uni,” said head distiller Patrick Maguire in a prepared statement.

The American oak-aged expression was aged in a 200-liter ex-bourbon cask for 17 years, and is said to be “very similar in age and style to the world-beating HH0351, which won Best Single Cask Single Malt in the World at the 2018 World Whiskies Awards.” The French oak-aged whisky matured in a 300-liter French oak ex-tawny cask for 16 years, was bottled at 47.5% ABV, and is limited to 169 bottles.

The distillery’s tasting notes for each whisky are below:

Nose: The darkest of all treacle and polished French oak furniture being warmed by a fire. Quality unlit cigars, prunes, molasses, cola and cherry jam.

Each bottle is packaged in an attractive wood box and comes with a letter of authenticity signed by Maguire and production manager Heather Tillott.