Suntory officials said this one-of-a-kind bottle was designed to represent what’s described as the vital force of Japan’s everchanging twenty-four seasons of the lunar calendar.

According to the House of Suntory, since its introduction in 1989, the Hibiki bottle has been presented with 24 facets. The design symbolizes the 24 hours of a day, as well as the 24 seasons of the year in the traditional Japanese lunar calendar. 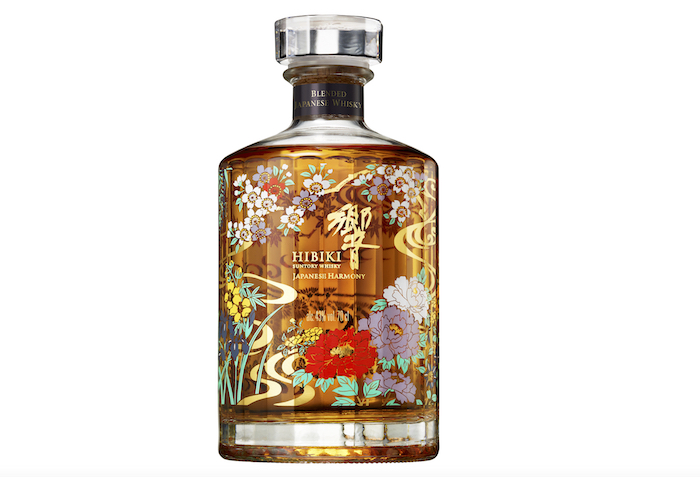 The 2021 limited edition pays tribute to the Ryusui-Hyakka (One-Hundred Flowers and Flowing Water). The design motif epitomizes the cyclical passage of time, showcasing the blossoms of the Japanese twenty-four seasons juxtaposed with the ever-changing flow of water that connects one passing season to another.

The Hibiki bottle celebrates the many varied blooms, colors and shapes of seasonal flowers of the Japanese year. An appreciation for the seasons and a sensitivity for the passage of time accounts for the Japanese culture’s sense of harmony with nature. In tune with Suntory’s philosophy, the design bottle series is described as the next iteration of the brand’s pursuit of harmony.

“The iconic Hibiki bottle has always been a representation of Japanese art and design, as represented by the many limited-edition series over the past ten years,” said Jon Potter, managing director of the House of Suntory, in a prepared statement. “This specially-designed bottle is not only the continuation of this artistic expression, it honors Hibiki and Suntory’s ethos to live in Harmony with nature. In 2021, this philosophy may echo with the world more than ever.”

The Hibiki brand was introduced in 1989 and is one of Japan’s most highly-awarded blended whiskies. Introduced in 2015, Hibiki Japanese Harmony is a blend of malt and grain whiskies from the House of Suntory Whisky’s Yamazaki, Hakushu and Chita distilleries.

The 2021 edition is available for a suggested retail price of $125 for a 750ml bottle. Official tasting notes are below.