When one considers that corn has been grown in the Mexican region of Oaxaca for over 7,000 years, it is a wonder we haven’t seen much in the way of whiskey emerge from this area. Earlier this year, however, we reviewed the unaged Pierde Almas Ancestral Corn Whiskey, made from said corn from said region. Now word has arrived of the recent debut of Sierra Norte Native Corn Whiskies, a trio of bottlings made from different corn varieties and aged in barrel for a short period of time.

The new Sierra Norte Native Corn Whiskies, according to those behind it, were distilled from approximately 3 of the over 35 native varieties of corn in the Oaxaca area. The expressions are Sierra Norte Black Corn Whiskey, Sierra Norte White Corn Whiskey and Sierra Norte Yellow Corn Whiskey. All three are made from 85% native corn and 15% barley mash as the mix of the mash bill. Aging occurred for upwards of eight months in French oak casks. 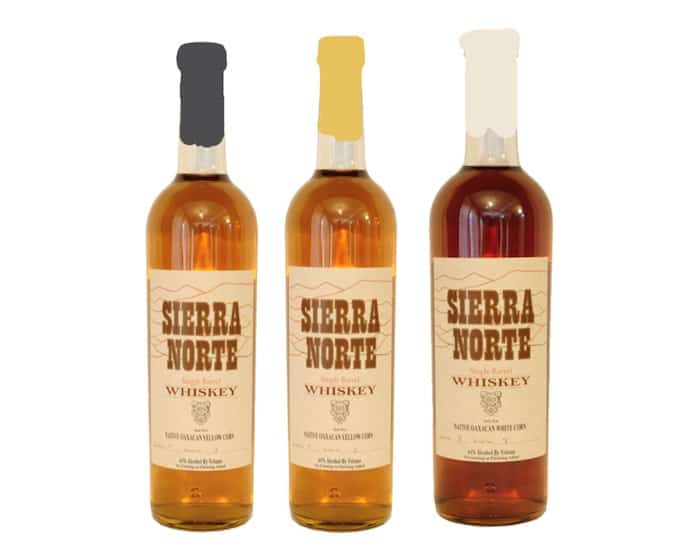 The trio of whiskies were created by one Douglas French, master distiller of Scorpion Mezcal. His three initial bottlings have been imported to the US and will be available for sale in New York, California, Texas, Connecticut, Rhode Island, New Jersey, Tennessee, Florida, Illinois and Massachusetts. Plans call for them to price between around $50 and $55, and a fourth release, Sierra Norte Red Corn Whiskey, should on the way shortly there after.

For more details on these whiskies, I encourage to check out a rather lengthy piece on them over at this mezcal blog.