Japanese whisky, for as much as it has been climbing the whisk(e)y world in popularity in recent years, has few bottlings old enough to match the 50+ age statement crowd in the extreme high end world of Scotch. That rare breed has increased now by one, however, as word surfaced recently out of Japan of a new 55 year old bottling from Saburomaru, a distillery you’ve likely never heard of , which is turning heads if, for nothing else, its super old age statement.

We’ve actually been aware of the Saburomaru 1960 for a bit, but didn’t want to steal the thunder from popular Japanese whisky site Nonjatta when they first wrote it up back in late June, especially around details of the specific cask aging and malt style. It has just now surfaced in very limited numbers at retail, however, so it is time to dive in to some extent. As we mentioned, this is a 55 year old expression, heralding from a distillery that’s said to have been making whisky since 1952 in very small amounts. This whisky is also said to be the oldest Japanese bottling ever released. 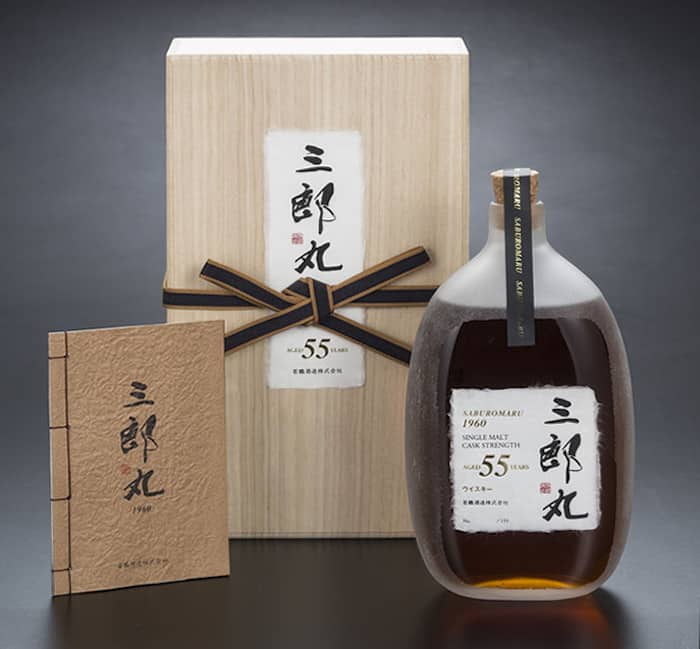 For more details on Saburomaru 1960, a Google Translate of the distillery’s Japanese language site gives us some interesting tidbits on it. It is a cask strength release (47%) ABV that’s limited to 155 bottles. It was distilled in May, 1960, aged in ex-red wine casks and then bottled 55 years later.

Saburomaru 1960 is presented in 700 ml bottles which are rather unique in their look. They’ve been designed for the distillery by a well known Japanese glass studio, with each one being blown. The box each bottle comes in is rather special as well, being made by a special craftsman. Even the label is super fancy, made of special Japanese paper.

So, if you are looking to get hold of a bottle of this, here’s the trick: they are pretty well already accounted for as the distillery apparently had a lottery last month. That being said, at least one has popped up at retail, priced at a rather staggering $14,500. They were originally priced, according to Nonjatta, at 550,000 yen, or about $5,500 USD, so you are looking at a super steep mark up to acquire one. It isn’t necessarily out of line though, as a Yamazaki 50 year old, for example, went at auction for around $33,000 back in 2014.

While you ponder purchasing it or not, here are official tasting notes from the distillery’s website, once again via Google Translate.