As I am driving up and down the Passo dello Stelvio from Livigno to Glorenza (Italy) I realize it is exactly 5 years ago that the first Italian triple malt whisky was presented by PUNI Destillerie. My second visit to the cubicle whisky temple is 5 years later and coincides with PUNI’s fresh start on the American market.

“Being awarded European Whisky of the Year 2021 by Jim Murray for our PUNI Aura means a deserved recognition not only for the Ebensperger family but very much so for every member of our small team”, says PUNI’s master distiller Jonas Ebensperger. ”And as we speak we are currently offering four Italian malt whiskies on select markets throughout the US: PUNI Gold, matured in ex-bourbon barrels; PUNI Vina Marsala Edition, aged exclusively in Marsala casks; PUNI Sole, a full-bodied bourbon aged and sherry finished whisky, as well as PUNI Alba, which was first aged in Marsala casks and subsequently finished in peated Scotch whisky casks”, adds Jonas. “Ever since we released our first whiskies, PUNI Nova and PUNI Alba, back in 2015, we have received many requests from American whisky enthusiasts. For a long time the only way to get our whisky to the US was for people to buy it in Italy and then bring it back themselves”.

Too early to get myself a bottle of the latest expression PUNI Arte, I settle for a sample a few weeks later. Having matured on ex-bourbon casks and Islay whisky casks I smell citrus, soft vanilla, cinnamon notes and a bit of smokiness far away. My tongue touches some lovely peaty vanilla fudge. “Our winning Aura 01 has matured in bourbon casks for two and a half years and another four years on casks from the Isle of Islay. It was bottled (393 bottles in all) in full cask strength of 56.2% abv. We’re currently selecting whisky for the Aura 02 and Aura 03”. 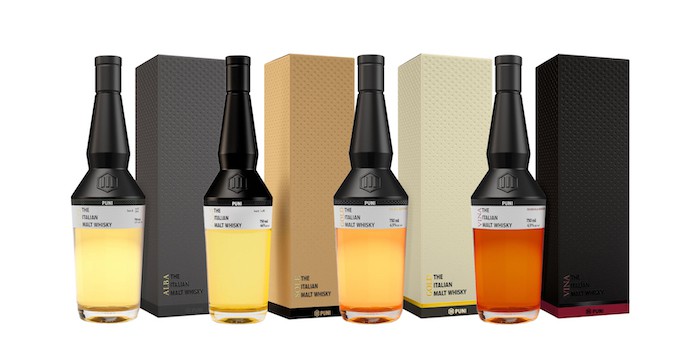 The malt whiskies of Italy’s Puni (image via Puni)

As I enter the PUNI distillery in Glorenza by its hidden door I see the sun beams being filtered by the brick construction and light up the heart of this state-of-the-art whisky temple. “The whole design was made up in a split second”, said architect Werner Tscholl. “I know about buildings but hadn’t the faintest clue about distilling. The only thing I was sure of was the external design. It should resemble the many hay sheds that can be found in this rural area”. Looking through the glass of the immense cube that makes up the interior of this whisky cathedral I see a copper wash and spirit still (by Forsyth & Sons) rising up out of the cellar like two arms greeting me. This is pure poetry. The tasting room downstairs is like a catacomb, an arched room from ancient times, neatly constructed in terracotta bricks. “This almost resembles a chapel with the counter over there as the altar”, Werner laughs.

PUNI is currently available in 11 countries: from select markets in Europe, all the way to Russia, Australia and Japan. Funny enough this slightly worries me. How do you expand this architectural cube of beauty when the demand of whisky is rising? “Good question”, says Jonas. “Both the wash still as the spirit still have the same shape, but the first is a bit larger. A deliberate choice we made from the start because we’re treating the first distillation with the same care as the second distillation. We run the wash still at much lower temperature than usual and therefore we can have a tall and slender wash still with a reflux boil. For us the first distillation is a vital part of the whole distillation process and therefore is executed with great care, slowly and at relatively low temperatures.”

“The second reasoning behind the shapes of our stills answers your question: Should we, in the future, decide to up our production output, we could use both current stills as spirit stills. This way we would go from one spirit still with 2,000 litres capacity to two spirit stills with a joined capacity of 5,000 litres. Of course this would require installing a new and bigger wash still as well as adding further fermentation vessels. The mash tun can be run twice a day in order to produce enough worts. So, we do not have space for additional equipment inside the distillery cube and would need to install the new wash still in a new building next to the distillery.”

A tattoo on Jonas left arm (three stripes) refers to the PUNI approach: rye, wheat and barley. Even tattoos are sometimes fading though. “Our main mash bill for the first four years of production has been a mixture of barley-, wheat- and rye malt. Then in 2016 we have introduced a barley malt only mash bill as well. Since then we have given this “Single Malt” mash bill more and more space in our annual production plan and are looking forward to the release of these whiskies soon. Malting the grain is the only production step that we do not do ourselves here at PUNI. We buy barley malt from different suppliers. Normal, not peated, malt we buy either from a malting company in Bavaria, Germany or from an Italian malting company near Rome. We are in constant discussion with our suppliers regarding the barley varieties that are grown. So far we are using mostly Laureate, Planet or Quench (Propino) and Concerto for the peated malt with a 50ppm phenol content.

There’s one more thing I would like to revisit and that’s the bunker warehouse. Just outside Glorenza I find a huge World War II bunker which is one of many in the area. “It’s an ongoing experiment”, Jonas explains. ”We initially set them up in order to test long time maturation of our whisky under different climatic conditions. So far no whisky has left the bunkers and we are focusing on our above ground dunnage warehouses. The naturally increased maturation rate in these warehouses is paramount to the overall mellow and elegant taste of our whiskies and we do not want to change this. Perhaps in the future there will be specific releases from the bunkers. If we are not satisfied with the whisky however, it just might be possible that we move the whisky to our dunnage warehouses for a finishing maturation”.

Time to go. Last question keeps lingering in my mind: how does Jonas please the sweeter American palate? “With our core range of four whiskies we already offer a relatively wide range of taste impressions. From the light to fruity PUNI Gold, all the way to PUNI Alba which is a full-bodied and smoky expression”.

I know for sure PUNI will succeed and surprise many Americans as it already did with so many whisky lovers on other continents. It’s veni, vidi, vici all over again.

48
Shares
1.5k
Views
Share on FacebookShare on TwitterGet Our Newsletter
Get The Macallan® Rare Cask at ReserveBar. Shop now!