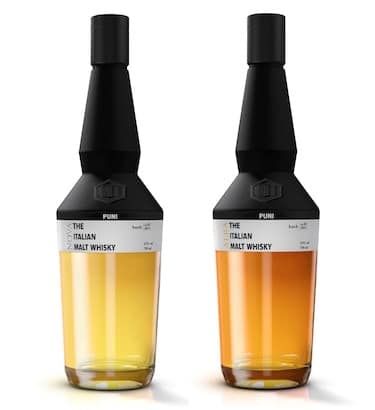 When it comes to Italian alcoholic beverages, wine is usually what comes to mind. It may be time to tweak that thinking a little bit, however, as the boot-shaped nation recently entered the single malt whisky world courtesy of Puni Distillery.

Puni, which you’ve likely never heard of until now, is a young distillery located in the self-described “Highland of Italy,” otherwise known to those looking at a map as South Tyrol at the feet of the Italian Alps. It makes use of a rather interesting mix of elements to produce its single malts, including “pure alpine water, locally sourced grains, traditional copper pot stills from Scotland and bespoke maturation warehouses,” the latter of which are actually converted World War II military bunkers!

Two initial expressions have been forth by Puni, which gets its name from a nearby river. Both have been released in 43% ABV and 54% ABV variants, and include the following:

Puni Nova, which has been matured for three years in American ex-bourbon barrels, then finished in European oak casks, and Puni Alba, which was matured for more than two years in Marsala dessert wine casks and one year in ex-Islay casks.

“After nurturing our special liquid for so many years, we are very proud to be finally able to share our new Italian-born whisky with the world,” said Jonas Ebensperger, one of the founders of the Puni Distillery, in a statement. “We put all our hearts into the making this whisky and we are very excited to give whisky lovers all over the world a chance to taste it.”

Now, should you want to get a bottle of one of these, that may be a little hard. At the moment as they are, for the most part, only available in Italy. They are slowly spreading across Europe to other countries, however, with prices ranging from €59 to €154. There is no word if they will come to the US at this point.