The love of sherry and whiskey brought two men together. Each gifted the other with a spirit, one a single cask cognac and the other an old Spanish brandy. As the story goes, the two men realized they both loved not only sherry, but fine spirits as well, and the pair decided they’d begin a project in which fine spirits would be aged in Sherry casks before being bottled unfiltered at cask strength.

It became a  joint venture between Nicolas Palazzi and Eduardo Ojeda of Equipo Navazos, and they dubbed the brand Navazos Palazzi … Spanish malt and corn whiskies aged in Oloroso sherry casks.

Nine years ago, Palazzi, founder of PM Spirits, was at a wine dinner in NYC along with a slew of sommeliers including Levi Dalton, who hosted these events. At that sherry dinner in the city, Levi guided attendees through a myriad of the finest sherries. At the end of the night, there were two bottles that stood head and shoulders above the rest. They both bore a name unfamiliar to Palazzi at the time … Equipo Navazos. 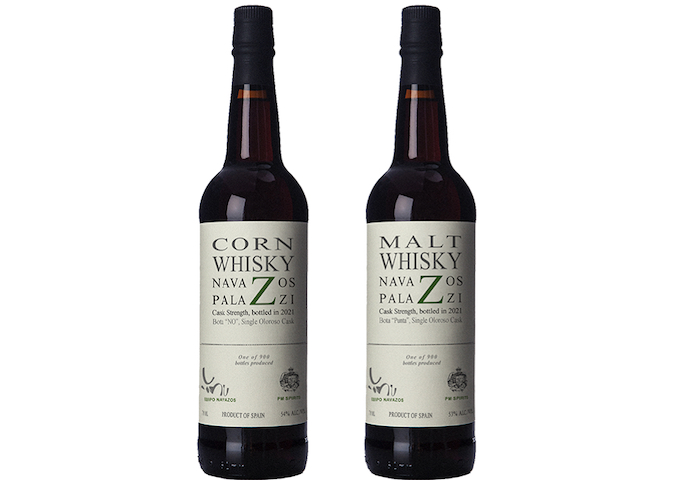 A year later and Palazzi is in Spain on a brief trip with family. Still enamored with those sherries, he scheduled a meeting with Ojeda, one half of the duo behind Equipo Navazos.

Ojeda brought Palazzi to the famed sherry bodegas of Valdespino and La Guita where they sampled old, rare, and truly singular wines. Only then, Palazzi said, he realized Equipo Navazos was not itself a sherry producer, but an independent bottler. They sought out the best casks of sherry from various producers throughout Jerez and bottled them with little or no filtering.

This discovery led to the exchange of bottles, and soon thereafter the joint venture Navazos Palazzi.

Since then, they have bottled whisky from Spain and Scotland, rum from the Caribbean, gin from Italy, and brandy from Spain, with all these spirits aged (entirely or partially) in high quality, freshly emptied sherry casks provided by Equipo Navazos.

Palazzi explained recently in a newsletter that the two, most newly-released whiskies under this brand are bottled unfiltered and at cask strength, and feature what he described as rich, nutty sherry aromas followed by intense, brooding notes of figs, butterscotch, and spiced caramel corn. The Corn and Malt whiskies each provide a different canvas for the Oloroso sherry casks to play with, and allow the character of the spirit to shine through.

A 15-year-old corn whisky distilled in Spain from 100 percent Spanish-grown corn. This 2021 bottling has been aged at full proof in freshly emptied Oloroso Sherry casks. This cask was a Bota NO – these are special casks within a solera, often with a singular profile that differs from the other barrels. The “NO” indicates that it is not to be topped up with other whisky.

A 15-year-old malt whisky distilled in Spain from 100 percent Spanish-grown malt. This 2021 bottling has been aged at full proof in freshly emptied Oloroso Sherry casks. This cask was a bota punta – the cask at the end of the bottom row of barrels in a solera. Due to its location, it is subjected to more air and light than other casks and receives more aeration, often leading to a unique profile compared to the rest of the solera.

These whiskies are are a little on the hard side to find given the small number of each bottling, so it is best to either search online for retailers or contact PM Spirits for help locating them.

Shares
875
Views
Share on FacebookShare on TwitterGet Our Newsletter
Cheers to the Dads! Personalize a bottle of his favorite whiskey to create a modern gift for the modern man. Use code: FATHERSDAY20 for $20 off your next order of $100 or more at ReserveBar