The Oxford Artisan Distillery is celebrating its four year anniversary and the release of its third batch of Oxford Rye Whisky to commemorate the occasion.

The distillery, said to be the UK’s first certified Organic Grain-to-Glass distillery, officially opened on July 31, 2017 and the production of rye whisky from heritage organic grains was a part of its core plan from the outset. The first casks of rye whisky were laid down just a few months after the distillery opened.

For this anniversary bottling of the Oxford Rye Whisky Batch #3, the liquid was first rested in American Oak casks and underwent a second maturation in Moscatel wine casks sourced from Portugal. 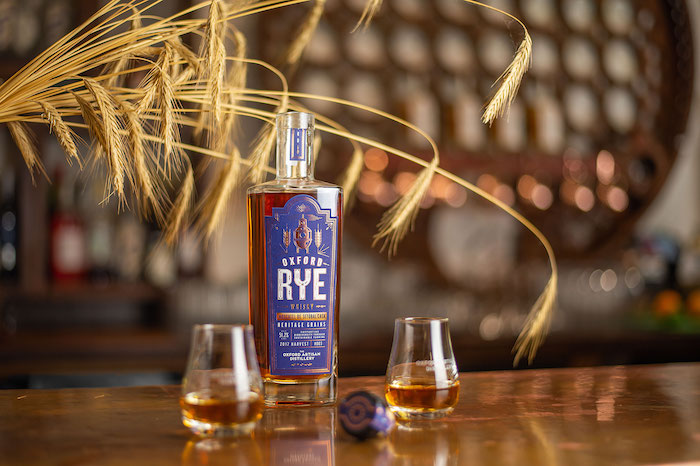 The Moscatel grapes are turned into a sweet, fortified wine in the Peninsula de Setúbal region. It is an aromatic grape variety with citrus, flowery lichee and pear flavors and pronounced sweet fruity notes.

The wine cask influence, it is said by the distillery, gives a floral and stone fruit character adding a rich sweetness to the rye.

Batch #3 is packed with notes of fruity gummy bears, peach, apricot and banana bubblegum, with swathes of honey and stone fruits, white chocolate adn a zing of tea-tree. It finishes with nutmeg and smoky hints of oriental BBQ.

“The sweet fruity flavours from the rye spirit and the Moscatel cask combine seamlessly in a floral bouquet of summer gardens. Our first batch was a classic take on American rye whisky. Batch #2 was more complex and inspired by Oxford, and with Batch #3 I wanted to bring more cask influence to our rye spirit,” Master Distiller Chico Rosa said in a prepared statement. “This batch of whisky suits this season impeccably – it breathes a wealth of freshness and summer fruits, with such beautiful complexity and vibrancy of flavours, it’s absolutely lush. Perfect to toast our first four years!”

The organic heritage grain used for this batch was harvested in the Autumn of 2017, just after the distillery’s opening. Made up of 90% maslin, a mix of 70% rye and 20% wheat from populations grown together in the same field, and 10% heritage malted barley, the grain is flattened and the flakes are then made into a thick porridge.

Fermentation for this batch took place over six days in the distillery’s bespoke 5000L Hungarian Oak vats, using their own in-house fermenting culture. Double distilled in the distillery’s truly remarkable custom-made stills, named Nautilus and Nemo, where the grains get baked into sticky sourdough notes, the resulting new make spirit was matured in virgin American oak casks for 17 months and then put in to Moscatel de Setúbal wine casks for a period of 19 months.

Oxford Rye Whisky Batch #3 is bottled at a cask strength of 51.2% ABV and consists of 551 bottles. It is priced at £120. Official tasting notes are below.