The Pineau is made from fresh grape juice, which is blended with Cognac and left to age in oak barrels for a number of years. The sweetness of the grape juice tempers the bite of the Cognac, which combined with what’s said to be dry nutty notes from European oak casks makes the Pineau a popular regional aperitif. 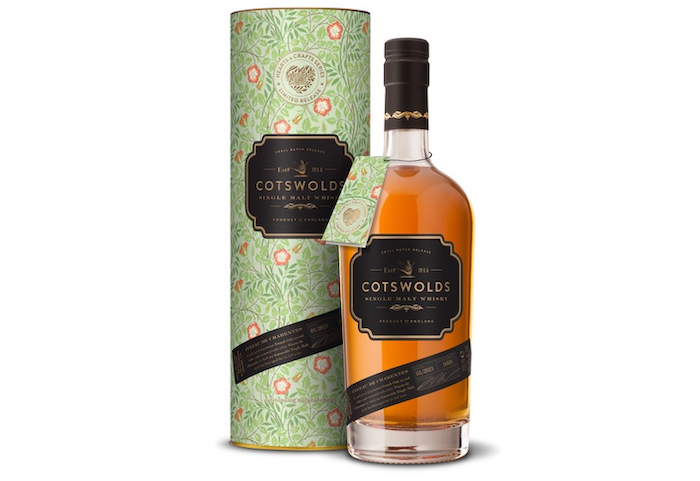 Cotswolds Distillery, looking outside the normal barrels, is aging the newly-released Hearts and Crafts Pineau de Charentes Cask in white grape Pineau casks, finding the French oak slightly more bitter and tannic than the American oak used by the distillery for aging their whisky.

“I first started drinking Pineau on a trip to the beautiful Atlantic island of Isle de Ré, just off the cost of La Rochelle, in 1994 and I’ve always had a soft spot for it,” said Daniel Szor, Cotswolds Distillery founder, in a prepared statement. “Hence the excitement at the idea of aging our Cotswolds single malt spirit in these casks.”

The Cotswolds single malt whisky matured for its full term in the casks, and Szor said what he describes as the techniques of rejuvenation and seasoning under pressure allows the distillery to get the best out of the wine … and the wood. “As the woodgrain is not tight, more tannins come into the spirit,” he added.

When it came to packaging, Cotswolds was inspired by the Arts and Crafts movement, as this expression sports a William Morris design. Szor said Morris was a prolific and innovative designer and one of the leaders of the Arts and Crafts movement of the late 19th century. His designs “stood for the importance of traditional craftsmanship, the same values upon which our beautiful rural distillery was built.”

Morris spent much of his time in the summer in his Cotswolds home, Kelmscott Manor, and the green leaves featured on the new bottle’s label and luxury gift box speak to St George’s Day, which is a highlight of spring festivities across the globe.

The distiller notes that Cotswolds Hearts and Crafts Pineau de Charentes Cask is rich with tonka bean, marzipan and caramelized peaches on the nose with a palate of raisins, brazil nuts, toffee, fudge and dried orange peel. It finishes warm and long with hints of white pepper and almonds.

The new release is a 700ml bottle and comes in at 110.4 proof. It is available to buy exclusively from Cotswolds Distillery, with 1,600 bottles available for around £75.

18
Shares
2.3k
Views
Share on FacebookShare on TwitterGet Our Newsletter
Cheers to the Dads! Personalize a bottle of his favorite whiskey to create a modern gift for the modern man. Use code: FATHERSDAY20 for $20 off your next order of $100 or more at ReserveBar