New Karuizawa Japanese Whisky Series Will Leave You Tied Up

Anything Karuizawa Japanese whisky is an extremely hot commodity on the market these days. Karuizawa, in short, opened in 1955 near an active volcano, producing a range of single malts from imported Golden Promise barley from Scotland which was often aged in sherry casks. It was ultimately mothballed in 2000, and the dwindling stock that’s left tends to make high end whisky buyers swoon. It is into this realm that online Japanese whisky retailer Dekanta has stepped, with word of a new 35 year old series that’s been inspired by Shibari, which is a Japanese style of artistic rope bondage (more on that below).

The Karuizawa Shibari 35 Year Old Sherry Cask Series, according to those behind it, consists of just 180 bottles across four limited edition designs that were collectively drawn from a single, 35 year old sherry casked whisky. The designs – coming respectively in blue, red, white and black – each feature “a rope elegantly tied in true Shibari fashion.” 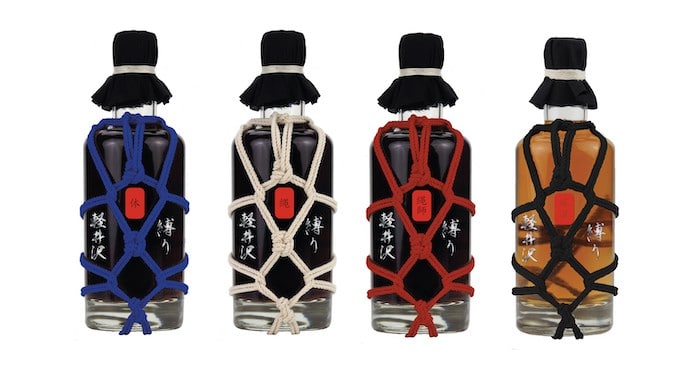 So – the Japanese practice of Shibari is deeply rooted in art, and we thought the theme was an appropriate fit for the whisky release – partly because both Shibari and whisky rely heavily on the engagement of the senses, and also because of the parallels that can be drawn between the art of Shibari and the art of Japanese whisky bottling.

The word ‘Shibari’ can be translated as ‘to tie decoratively’; the art of Shibari involves tying a person up using simple yet visually intricate patterns, using several pieces of thin rope. (Though it is linked to sexuality, the focus here is on aesthetics and sensuality) Like the art of whisky making at Karuizawa, it’s an art that is little known outside of Japan, and we feel it deserves a little more credit – especially considering the huge impact that both whisky and Shibari have had on their respective fields.

Our bottle series is designed to deliver to the onlooker the same level of intricate beauty and sensuality as found in this ancient art, and is representative of a trend in the whisky industry towards ever more beautiful bottle designs – at home just as much at an art exhibition as in your drinks cabinet!

The inspiration for the bottles is not necessarily obvious at first glance. We feel it is a subtle and classy design that has hidden depth.

So, there you have it on how to consider these bottles as you look at them and think about the meaning behind their naming. As for how to get hold of a bottle should you want one, the online whisky retailer is planning to hold a ballot drawing the week of February 18th. Those who enter by then will be doing so for the chance to buy either a whole set (45 each of the four designs) or their favorite design. Specifics of the bottlings beyond the design indicate each to be 700 ml in capacity, with the blue (Nawa), white (Nawashi) and red (Karada) ones being bottled at 60.6% ABV and the black (Nawa-Do) one being bottled at 56.5% ABV.

“Like the enjoyment of Japanese whisky, the Japanese art of Shibari engages the senses, and this bottle series is designed to convey the same level of intricate beauty and sensuality as found in this ancient art,” said Dekanta Founder and Director Makiyo Masa in a prepared statement. “The fantastic reaction in response to last year’s Karuizawa Cities of Japan series reinforced our understanding of the huge demand and enthusiasm for new releases from the silent Japanese distillery.

““I’m thrilled we’re able to give our clients another opportunity to own a true piece of Japanese whisky history, presented with such sensual and iconic Japanese designs.”