The APEX Dead Sea is the first result of M&H’s research and development program, which spotlights what’s described as Israel’s distinct terroir and environment by experimenting with different climates for cask maturation, while staying faithful to Scottish whisky traditions and legacy. 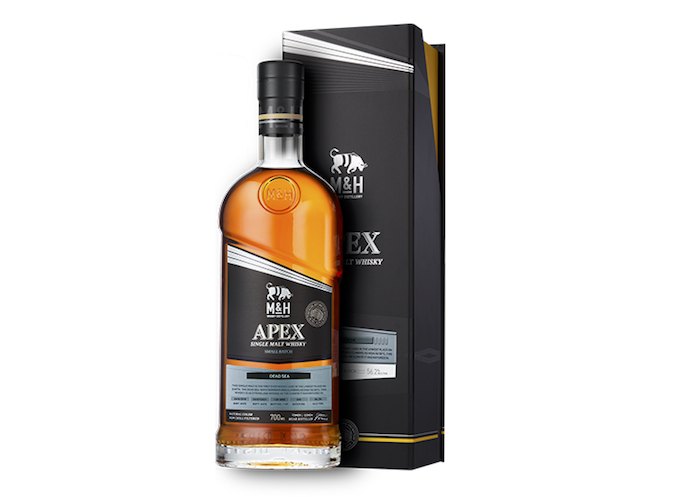 The Dead Sea experiment started in October of 2018, when M&H Distillery placed 20 ex-bourbon, ex-red wine, and ex-STR casks on the rooftop of a hotel at approximately 1,387-feet (423 meters) below sea level.

The casks matured in the Dead Sea region for an entire year before being returned to the Tel Aviv warehouse and bottled in July of 2021.

The final result is a unique whisky that is said to capture the Dead Sea’s distinct characteristics, including low annual precipitation, an arid and dry desert climate that can reach 122°F in the summer and a salt content 9.6 times that of the ocean, resulting in “angel’s share” of up to 25% per year, compared to only 2% in Scotland.

Tomer Goren, M&H Distillery’s head distiller, said in a prepared house, “Due to the evident rapid wood effect and maturation in this very hot and intense climate, we had to inspect the casks more frequently and thoroughly. Understanding the impact of the desert climate on the cask was a fascinating experiment and study project. I look forward to continuing our geographical experiments, with the Sea of Galilee and the Jerusalem Mountains coming up next.”

The distillers’ official notes show that bottled at 56.2% ABV, the APEX Dead Sea has a sweet nose of French vanilla and chocolate, hints of cigar box, and a refreshing note of spearmint, with an oakiness in the background.

The taste starts with black tea leaves, then builds with a surge of warm spices like cinnamon and coriander seeds, dark chocolate powder, and a pinch of crushed white pepper.

The finish is long, with candied ginger and cloves mingling with roasted herbs and coarse sea salt in a bouquet.

The first batch of the APEX Dead Sea is limited to 4,892 bottles and is available globally in select countries including France, the United Kingdom, the United States, the Netherlands, Taiwan and Germany.