Taiwanese single malt whisky purveyors Kavalan Distillery are closing out their 15th year of operations on an artistic note. The distillers are releasing a new “Kavalan Artists Series,” a limited release of four different bottles in collaboration with artist Paul Chiang.

The quartet of cask-strength whiskies—Puncheon, Virgin Oak, French Wine Cask, and Peated Malt—are packaged with labels and gift boxes featuring reproductions of some of Chiang’s paintings in a run of 4,000 individual bottles. As well, smaller bottlings of 700ml each will be available in a limited-edition gift set that includes a numbered and signed silkscreen print of one of two Chiang works. Only 198 of these sets were made. 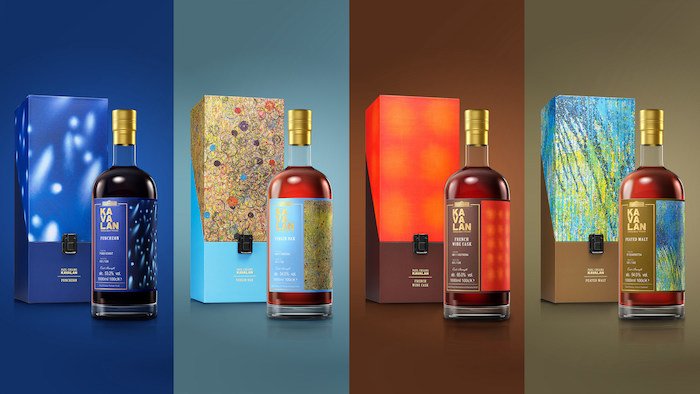 “Art, like whisky, has the power to stir deep emotion,” said Kavalan’s CEO YT Lee, in a prepared statement. “But this takes decades of hard work and commitment to mastering your craft. We want to bring together great art and our rarest whisky to connoisseurs an expression of the finest artistry. We are honored to be collaborating with Paul on the inaugural edition.”

The four bottles represent a range of expressions from Kavalan. Their Puncheon Whisky was aged in puncheon casks, drawing out flavors of sweet toffee and tropical fruits, while the Virgin Oak Whisky matured in virgin oak barrels, resulting in notes of sweet honey, cinnamon, and chestnuts. And their French Wine Cask release was aged in red wine barrels sourced from wineries in Bordeaux, France, lending wild berry and tannin qualities to the whisky.

Kavalan’s Peated Malt stands out from the pack as it is their second release that uses the Shave, Toast, and Rechar technique. The barrels used to age the whisky have small layers of wood shaved off to uncover more active wood underneath, and they are then toasted and recharred. Additionally, this whisky uses malt smoked with deep-mined peat which is evident in its flavor alongside notes of red pepper and buttered toffee.

Individual bottles of Kavalan’s Artist Series, which all fall in the 50-63% ABV range, are available now in Taiwan for NTD$12,000 (about $425 USD). You’ll find more complete official tasting notes and other information for each below from the brand.

Chiang, by the way, was born in Taichung in 1942 and, after spending about 30 years in his pursuit of an art-infused life, eventually found himself, after living abroad, returning to Taiwan in 1998. It is there, in Taitung, that it is said “he immersed himself in the abundance of nature. His journey of creation is one marked by massive transformations giving rise to a fantastic body of artworks.”

The indigenous name, Pisilian, refers to a stretch of Taiwan’s eastern coastline, connecting Kavalan’s home in Yilan County with Taitung County where Paul Chiang is based. Kavalan’s story, or dream, starts in the Ocean under a starry sky. From here, moisture rises and eventually condenses above Snow Mountain, creating Kavalan’s legendary water source.

Painting – On Wings of Song

Named after a Felix Mendelssohn piano piece, Paul Chiang’s circular brushstrokes imagine effervescent air particles and the beating of wings, creating the sensation of air in motion. The Kavalan dream takes flight in Air, and this painting can be seen as an artistic rendition of whisky’s maturation process.

The golden Sunlight in this piece represent sparks of hope, lighting the path toward the Kavalan dream. The fiery red denotes both the intensity of purpose and the heat of the sun, the same life-giving warmth that uniquely enhances Kavalan’s ageing.

The final piece in the set is both homecoming and rebirth. The green, yellow, and blue represent Taiwan’s East Coast’s lushness and the vibrant flavours and scents of Kavalan whisky. This Mother Earth bears the fruits of labour for both Kavalan and Mr Chiang and the seeds for new growth. The Kavalan dream becomes a reality.

Buttered toffee and peaty and earthy notes on a bed of red pepper, generous spice, and rich longan.