Fuji Whisky, new to the U.S. market, has quite the impressive lineage, making use of Mount Fuji snowmelt in the production process of its Japanese whisky.

Importer Distinguished Vineyards & Wine Partners launched the whisky brand in the U.S. for the first time in its history, with Fuji Single Grain Whiskey ($94.99) now available at select establishments nationwide and Fuji Whisky ($59.99) slated to arrive later in November.

Mt. Fuji Distillery was established in 1973 to bring what’s described as Japanese craftsmanship to life while employing Scottish, American, and Canadian whisk(e)y making methods under a single roof, an amalgamation that celebrates whiskey’s worldwide heritage. 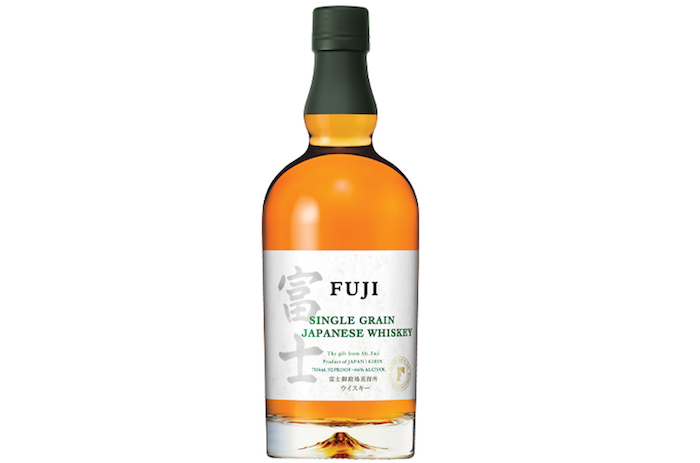 Named after one of Japan’s most iconic landmarks, Mt. Fuji Distillery sits just miles from the peak of Mt. Fuji and is one of only a few whiskies in the world to use a mountain’s snowmelt in its production.

What’s described as the snowmelt’s 50-year journey from Mt. Fuji’s peak to the depths of an underground aquifer to the distillery results in a clear, pristine, and soft water that is the foundation for Fuji’s whisky expressions.

Master Blender Jota Tanaka referred to the water source as the “precious gift.” Tanaka is an Icon of Whisky Award Winner in 2017, with 30 years of experience in the industry both in Japan and the U.S. and is only the second master blender in Mt. Fuji Distillery’s 48-year history.

“It’s an honor for us to introduce Fuji Whisky to the U.S. market and share such an exceptional range of whiskies that represent the culmination of about 50 years of distillery experience in Japan,” said Steve Myers, Distinguished Vineyards & Wine Partners’ managing director of North America, in a prepared statement. “We believe in celebrating the distinctive attributes that place of origin can impart on flavor profile and style, and no other source of Japanese water is more pure or iconic than the glacial snowmelt coming from Japan’s Mt. Fuji itself.”

The Fuji Single Grain Whisky is a blend of three different grain whiskies, each distilled by three different methods, each possessing its own unique flavor profile. The distiller’s official tasting notes show the American segment features a more heavy, rich, floral fruity style; the Canadian type is medium, luscious, and delicately fruity; and the Scotch type is known for its lighter, soft, and compelling qualities. The combination yields a delicately fruity whisky that’s both mellow and multi-layered in profile.

The Fuji Whisky expression showcases malt and grain whiskies, including three different types of grain whisky, creating a flavorful, complex, and balanced liquid. Fuji Whisky is a blend of Japanese and Scotch whiskies.