Japanese Rice Whisky Should Be Approached With Curiosity

I fell in love with whisky at the young age of 16, not in consequence of tasting it, but through the pages of World Whiskey, a book written by Charles MacLean. The first encounter was through the history of whisky and that was enough to get me hooked. Whisky is ever evolving, and while we are alive, we get to experience its journey.  New styles emerge from all around the world, like Japanese whisky, and even after such a successful century for Japan in the world of spirits, we are beginning to see the rise of a new style of Japanese single grain whiskies that are made from malted and un-malted rice.

Introduced three or so years ago in the North American market, it is yet unobtainable in Japan. Technically, this spirit is made exactly like shochu is; however, some distilleries age what would be considered shochu in barrels for several years, giving it color. Today, for a complex set of reasons, what we would label in the US as “Japanese rice whisky” because of how we view grain use in whisk(e)y is technically illegal in its nation of origin. Shochu, in essence, has to be sold in Japan as a clear or very lightly colored spirit; thus all shochu aged in barrels has to be heavily filtered, stripping the color and most of the aromas and flavors originating from the wood.

Fortunately for us Chris Uhde, from GRC Imports, caught wind of these barrel aged rice spirits from Japan. Having tasted a cask strength sample, he saw an opportunity for this hidden style of shochu, like a phoenix rising from the ashes, to be introduced as a new spirit category to the world. After two years, Uhde finally got permission to bottle these aged spirits made by the Ohishi and Fukano distilleries. Both the US and Japanese governments agreed that these barrel aged shochus could be sold as a single grain whisky in North America. 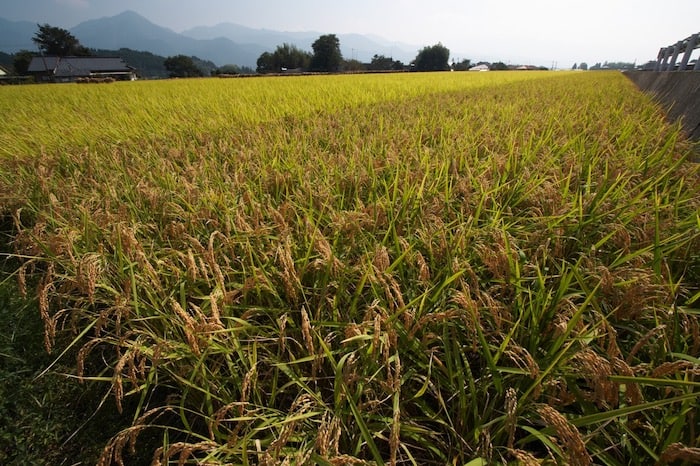 The rice paddies from Ohishi (image via Anthony Delcros)

Ohishi (est. 1873) and Fukano (est. 1823) are 2 of the 27 shochu distilleries from the prefecture of Kumamoto, on the Island of Kyushu. Both utilize locally sourced rice as the base ingredient. Ohishi in particular grows many different varieties of rice, and these homegrown varieties of rice constitute 30% of the mash of the whisky, while the other 70% is locally grown mochi rice, which has high sugar content.

To start the fermentation in making this whisky, a type of fungus called koji is mixed with the steamed rice to breakdown the starch into sugar, followed by a first fermentation. During this period the primary moromi (mash) rests for 40 hours before adding another layer of steamed rice and letting it rest for seven days.

A secondary moromi then takes place – with the addition of yeast – for a duration of 14 days. The resulting wash is put into a reduced pressure stainless steel pot still – originally designed for the perfume industry – at 17-18% ABV. Such a still allows for the temperature in it to be relatively low, extracting a very clean and highly aromatic distillate. This is a single distillation pass that preserves the flavors of the rice and the complex aromas created through the production process before barrel aging. The end products are usually a vatting of different ages, from 7 up to 27-year-old whiskies, that are aged typically in either in brandy or sherry barrels provided by a local cooperage, Ariake.

This whisky production method could seem by some as time-consuming and long but, patience is a virtue, as they always say. The calm and tranquillity those in the Kyushu region live by, with a cuisine that values the subtle and authentic flavors brought by ingredients from sea and land, are reflected in the way any local shochus are produced. We can definitely imply the notion of terroir in these spirits.

From the comfort of my home, thousands of miles away from Kumamoto, I have had the chance to experience a unique and small part of it and I hope you do too. These are whiskies that should not be approached with the intention of encountering flavors similar to a single malt or bourbon, but to be greeted with a desire for discovery.