North England’s Ad Gefrin Distillery recently announced that the barley growers for its debut Northumbrian Whisky will be farms all located within 10 miles of the distillery itself.

The barley will be stored locally, and malted in Berwick Upon Tweed, by Simpsons Malt, before delivery to the distillery in Wooler. The whole operation will happen within a 20-mile radius of Ad Gefrin distillery, which sits near the UK’s Northumberland National Park.

This region is known for producing a high quality barley, and it’s among a chief export for the area. 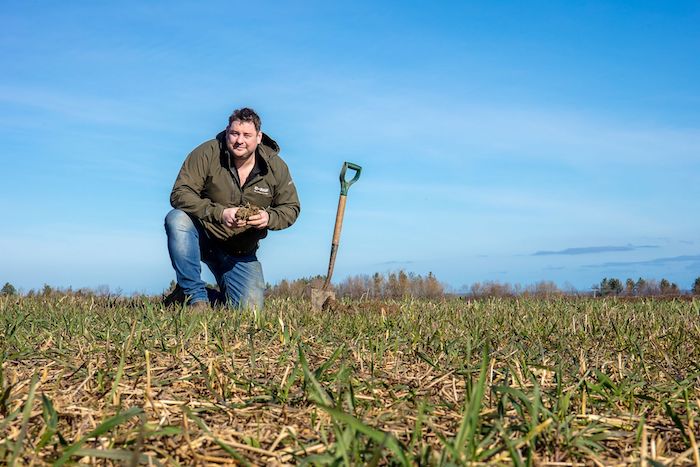 North England’s Ad Gefrin Distillery recently announced that the barley growers for its debut Northumbrian Whisky will be farms all located within 10 miles of the distillery itself. (image via Ad Gefrin)

The type of barley chosen for Ad Gefrin’s whisky is Diablo, one of the highest yielding spring barleys on the market. The four farmers selected to grow approximately 400 tons of barley between them for Ad Gefrin are Tom Jackson, growing at Northfield Farm Lowick, George Farr of Pallinsburn, David Warcup of Letham Hill Farm, and Etal and Cameron Shell of Brandon near Powburn.

Ben Murphy, Ad Gefrin’s head distillery, said in a prepared statement, “It is so exciting to be able to produce a malt which will be grown by local farmers, and malted by Simpsons Malt, who are literally just up the road. The relationship with growers will be collaborative, as the barley is grown and malted specifically for us.”

Barley is not the only ingredient that will be entirely local … there’s also the water. It will be drawn from a borehole on site which will deliver water from a depth of 200 meters, which comes directly from the nearby Cheviot Hills.

As far as sustainability, energy for the process will also be sourced locally, with electricity generated from Ad Gefrin’s many rooftop solar panels.

“A whisky is of course not just about the barley; the barley is just one of many factors,” Murphy said. “There is the water, and the years required for maturing, the wood chosen for the casks, and of course the careful handling by the stills’ team. Ad Gefrin will be a Northumbrian whisky, through and through, grown, distilled and nurtured in the shadow of the Cheviot Hills.”

The relationship with Simpsons Malt is vital to Ad Gefrin, Murphy explained, as the fifth-generation family business has the infrastructure in place through its position as both a malting and agricultural merchanting company to connect the grower to distiller, showcasing supply chain traceability from seed to spirit.

“It is really exciting to be part of such a major milestone for Wooler and north Northumberland,” said barley grower, Tom Jackson, “Normally our malting barley goes to Scotland, so we are pleased and proud to be part of this new enterprise to produce a genuinely local product.”

Ad Gefrin will open its doors to the public in the fall of this year. Ad Gefrin Single Malt Whisky will mature from the year 2025 and onward.

For more information, check out adgefrin.co.uk.