Bimber Distillery Reveals Whisky Release No. 2 From The Spirit Of The Underground Collection

Bimber Distillery out of England recently revealed its second release from The Spirit of the Underground Collection of whiskies.

The London-based distillery announced the release of this second batch, produced in conjunction with Transport for London. The collection will feature a total of 44 individual releases over a three-year period, featuring a selection of iconic single malt whiskies that celebrate the heritage and diversity of the distillery’s home city.

Each bottle represents a different Tube station on the London Underground network — noted as being the oldest underground passenger railway service in the world. 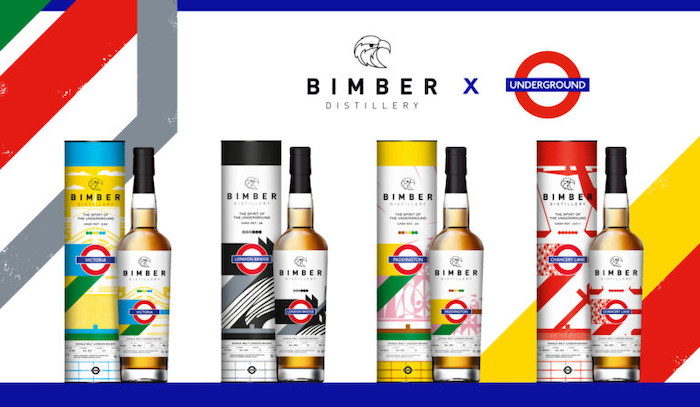 After the fast sale of the inaugural collection’s release, Release No. 2 will showcase four new stations; Chancery Lane, London Bridge, Paddington and Victoria. Each comes with iconography that presents unique pieces of London’s history and is decorated with labels and packaging.

The four new expressions, drawn from some of the distillery’s oldest stock laid down in 2016, include Madeira, port, PX sherry and ex-rye casks, bottled at full cask strength and without chill filtration.

“Following a terrific reception earlier this year to the first four releases from The Spirit of the Underground, we’re thrilled to unveil the next stations that will be joining the Collection,” Matt McKay, spokesperson for Bimber, said in a prepared statement. “For this second collaborative release with Transport for London we have selected four distinctive and exceptional casks from amongst our very finest. Each typifies our hand-crafted approach to whisky making, whilst at the same time offering an ever-broadening selection of flavour experiences with which to celebrate the history and diversity of our home – London.”

The spirit was produced from the distillery’s single farm barley and malted on a dedicated floor at Warminster Maltings before being fermented for seven days in bespoke, on-site constructed American oak washbacks.