London craft distillery Bimber has announced their second single-malt whisky, Bimber Re-Charred Oak Casks. This is the initial run of a single malt aged in charred American oak, and is limited to 5,000 bottles.

This upstart West London distillery gets its name from the Polish word for moonshine; founder and distiller Darius Plazewski is a Polish immigrant whose grandfather made his own bootleg spirits in the communist era. The distillery’s inaugural release in September sold out in less than three hours.

This expression is the distillery’s second single malt, laid down in 2016, their first year of production. It’s made from “single farm barley and malted on a dedicated floor at Warminster Maltings,” according to a prepared statement from the distillery. That grain is fermented in custom-made American oak washbacks, and then distilled in specially made copper stills, “which possess an increased copper surface area, resulting in a light and fruity, but layered new make spirit.” 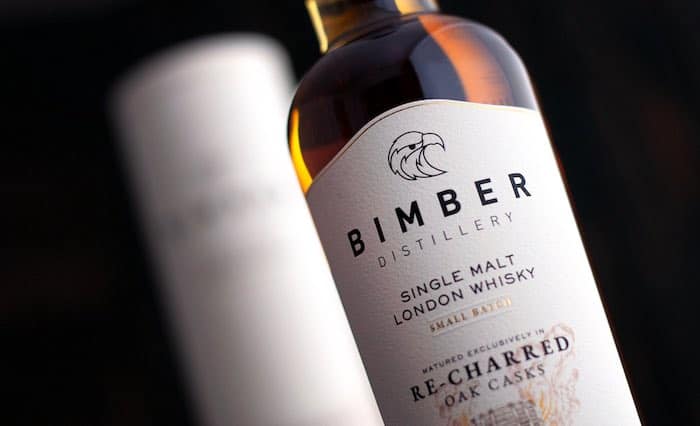 The barrels are the interesting part—the statement references “on-site coopers.” It’s not entirely clear where the barrels come from, but it sounds from the name of the whisky like they once held something else; once they arrive at Bimber, they are charred to a #4 or “alligator” char.

Char level isn’t often something that gets discussed when talking about the whiskies of the British Isles, as most of them are matured in used barrels. Instead, Bimber emphasizes that “the deep charring process caramelised the wood sugars, adds a layer of filtering carbon to the surface of the barrel and influences the whisky by imparting distinctively sweet, rich smooth and fruity flavours into the maturing spirit,” all of which sounds kind of like we’re talking about an American whiskey. It is bottled at 51.9% ABV.

Tasting notes from the distillery are below:

Nose: Orchard fruits and spit-roasted pineapple chunks are sweetened with honey, nougat and cookie dough. Oak smoke and wood char float across the nose, whilst cinnamon and pepper spicing offers an enlivening intensity.

This whiskey is available for pre-order now on Bimber’s website at £65 for a 70 cl bottle—a little over an imperial pint. It will be available “via leading retailers” in early November.