The grain whisky, seasoned in ex-sherry casks, uses Bain’s Cape Mountain Whisky as its base, and is then matured another 10 years in aged American oak casks before being transferred to seasoned Amontillado and Manzanilla sherry casks for its remaining six years of maturation.

The distiller’s tasting notes show that the 21 Year Old boasts a deep amber color and offers notes of fruit and spice mixed with sweeter notes of the one grain whisky. It’s non-chill filtered and clocks in at 46.8% ABV. It’s available now in travel retail in a 1L bottle. 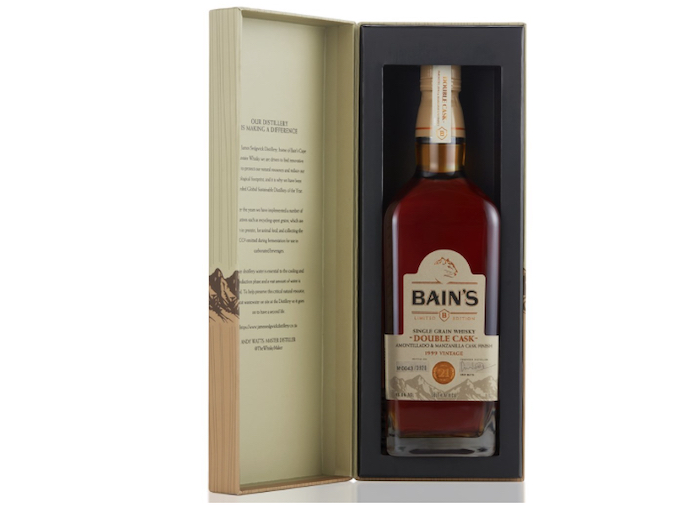 Distell’s head of whisky and Bain’s founder, Andy Watts, said that innovation is significant in his  business and though he’s crafted many cask finishes, the mixture of two completely different cask finishes is a key for him.

“This, coupled with the fact that the whisky is the oldest Bain’s released to date, makes for an exciting product launch,” Watts said. “I hope that Bain’s 21 Year Old Double Cask brings as much enjoyment to our consumers as it has to me over the years since I first envisioned the project.”

Earlier this year, Watts was inducted into Whisky Magazine’s Whisky Hall of Fame, in recognition of his dedication to the South African whisky business.

Bain’s Cape Mountain Whisky is crafted at the James Sedgwick Distillery, near the foothills of the Bainskloof Pass, the road that traverses South Africa’s Cape Mountains.

Sustainability is an integral part of Bain’s production process, with initiatives to recycle spent grains that are excessive in protein, for animal feed, and accumulating the CO² created throughout fermentation to be used in carbonated drinks.

The distillery’s wastewater is handled on-site, recovering methane fuel to then re-use within the whisky-making process allowing them to scale back coal utilization, with the remaining wastewater being re-used for cooling and in boilers.

For more information or where to purchase, check out https://bainswhisky.com.