He’s an award-winning piper that’s taken a turn at playing his music to casks of whisky, just before the juice goes to bottle, in search of more flavor.

Ali Levack, frontman of Scottish trad band Project Smok, recently joined forces with Wee Smoky, a whisky brand looking to attract a new audience to Scotch. Together, this pairing is releasing a single and a bottle in what’s seen by them as perfect harmony.

Levack, a piper and whistleman who hails from Dingwall, Scotland, and was BBC Radio Scotland’s Young Traditional Musician of 2020, played to the whisky casks to enhance the flavor, a process known as sonic-aging. 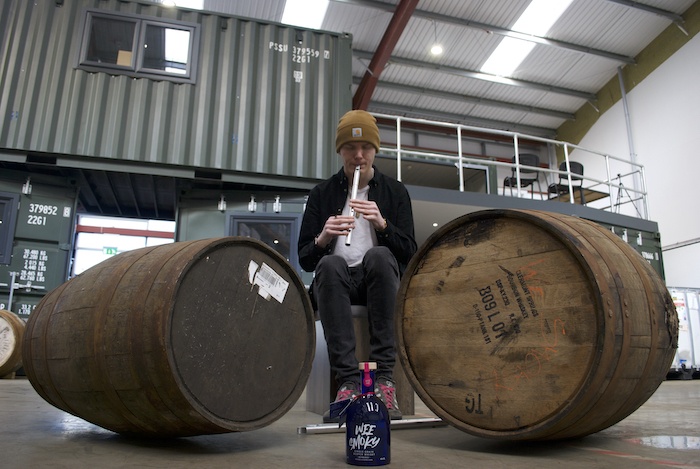 The partnership began when Project Smok auctioned naming rights to their new single in a creative way to tackle loss of income due to the cancellation of live gigs during the Covid pandemic.

Wee Smoky won the auction, and is celebrating the release of the song “Wee Smoky” with its own release of 550 special edition bottles, with £1 from each bottle going to the neo-trad trio.

Levack said in a prepared statement that playing to whisky casks was a completely new experience. “I loved being part of the whole process, from playing our music to the whisky while it aged to drinking it while listening to our recorded song. The song and the whisky go very well together.”

When the world ground to a halt in March of 2020, Levack and bandmates didn’t know where they’d be after a year or more of lockdown.

“We had to think outside the box as to how we could generate income until we could start playing live music again,” he said. “Auctioning off naming rights to a song was an idea we didn’t think would work, but it has ended up with us having our own whisky named after us, which is a dream come true.”

On the Wee Smoky “Project Smok” bottles will be a QR code, which will take drinkers directly to the song “Wee Smoky” on Spotify.

“Music is part of everything we do. Our whisky is best enjoyed with music so it was natural to experiment to see how music could enhance the flavor,” said Rory Gammell, Wee Smoky’s founder. “My dream was for Project Smok to headline our launch party. Unfortunately, those plans were put on hold. Nobody embodies the spirit of our brand quite like them. They’re non-conformist and I couldn’t think of a better example of Scottish flair – they’re a remarkable band with a unique sound.”

And, for historical context, the concept of “sonic-aging” goes back to the 18th and 19th centuries, when vibrations in oak casks caused by transit across the seas were considered essential to the aging process of liquors including whisky. It is thought that by playing music to casks, these vibrations can be recreated, enhancing the flavor of batches by accelerating the way liquor reacts with the wood.