The relatively young Wolfburn Scotch single malt whisky distillery, located in the very northern part of Scotland, has only been in production since 2013. It has grown at a rather decent clip since that time, with its whiskies now available in 26 countries globally. It is thus interesting to note it is finally releasing its first whisky that’s been matured in one type of cask and finished in another.

The new Wolfburn Batch 155, according to those behind it, were initially matured in one type of cask (first-fill ex-bourbon barrels for close to five years) then finished in another (six months in port hogsheads). Like previous Wolfburn small-batch releases, Batch 155 was named after the warehouse in which the casks were matured (Warehouse 1), and the specific row in which the casks were located (row 55).

“We’ve crafted Batch 155 from whisky matured in fresh bourbon casks laid down in 2014,” said Mark Westmorland, Wolfburn brand ambassador, in a prepared statement. “The spirit had already matured very nicely, even before it was transferred to a series of Fonseca ruby port hogsheads. The result is a truly special single malt, rich in colour and deep in flavour. It has been extraordinarily well received by everyone who’s tried it.” 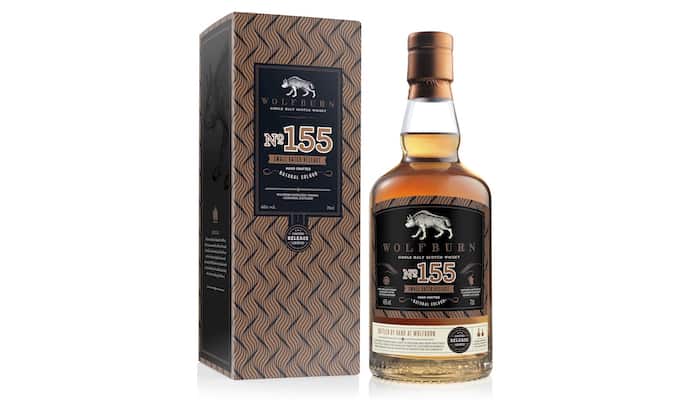 “We’ve been asked many times about doing a ‘finishing’,” added Iain Kerr, Wolfburn distillery manager. “We managed to keep this one under wraps until the last minute. It’s been a lot of fun to make, and the results are really special. I hope our fans and followers around the world enjoy it as much as we do!”

As it stands now Batch 155 is a limited edition release, with just 5,000 bottles planned for a release in the markets this distillery is present in. You’ll find some official tasting notes below.