The Whistler Irish whiskey brand, produced by the family owned Boann Distillery in Ireland, came to American shores for the first time earlier this year with a trilogy of bottlings, including a doubled oak expression. They are now back again with three more new offerings for the American market, all of which this time around are focused on cask finishing.

The Whistler Cask Finish Series, according to those behind it, encompasses three expressions – Oloroso Sherry Cask Finish, Calvados Cask Finish and Imperial Stout Cask Finish. You’ll find full details on each of these below based upon information provided by the brand.

“All are bottled at 43 percent ABV, non-chill filtered and contain no caramel coloring.” 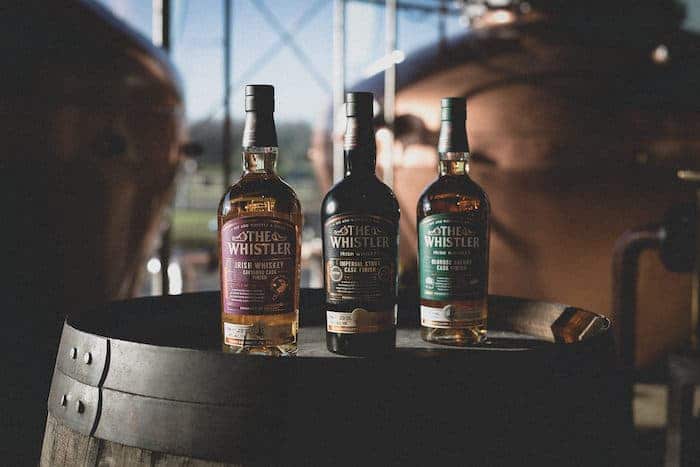 This whiskey is triple distilled for extra smoothness and features the distillery’s signature blend of 35 percent single malt whiskeys and 65 percent grain whiskeys, which are independently matured in ex-bourbon barrels for at least four years before being married together and finished in Bodega Sherry Oloroso Casks for at least 12 months. The bourbon barrels give the whiskey its sweet warmth and the Oloroso casks deliver the unique fruity tones which are synonymous with the Whistler.

This whiskey is a collaboration between Boann Distillery and famed Calvados producers Chateau du Breuil, in Normandy, France. The expression features the same base high malt content signature blend used in the Oloroso Sherry Cask Finish. which makes these whiskeys incredibly interesting to try side by side as an investigation into the impact of different cask finishes. The signature whiskey blend is then married together and filled into Chateau du Breuil’s finest 10-year-old French Oak Calvados casks and left to finish for a period of at least 15 months. This whiskey was awarded a Gold medal at the 2020 World Whiskies Awards.

This whiskey is a collaboration between Boann Distillery and its sister brewery, Boyne Brewhouse. This expression begins its life, when ex-sherry barrels, containing The Whistler 7-Year-Old Blue Note, are emptied by the distillery and sent the brewery for its 10.8 percent Imperial Stout beer, which is left to mature in the casks for a minimum of six months. Once the beer is fully matured, the casks are emptied of beer, and on the same day, filled with a bespoke whiskey blend of 50 percent wheat whiskey, 35 percent malt whiskey, and 15 percent grain whiskey, all individually matured in ex-bourbon barrels before being married together and finished in the Imperial Stout beer Casks for a further six months.

11
Shares
1.1k
Views
Share on FacebookShare on TwitterGet Our Newsletter
Get The Glenlivet 18 Year Old at ReserveBar. Shop now!