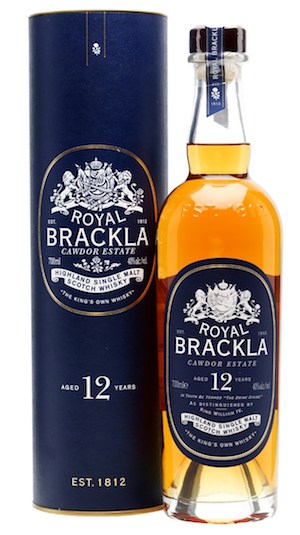 Royal Brackla 12 year old Highland single malt Scotch whisky proudly bears the title of “The King’s Own Whisky,” emblazoned across its label. Perspective is always key when evaluating anyone else’s appraisal of anything. After all,  a great many Americans would see a king as just another dude, albeit with a stinkingly different bank account.

However, the royal connection with this single malt goes somewhat beyond an individual endorsement. Established in 1812, the Royal Brackla Distillery was granted a Royal Warrant by King William IV in 1833, and therefore bears the name “Royal” on their label as legal designation within the British monarchy.  This distinction is shared only by the still currently active Royal Lochnagar and the former Glenury Royal distilleries. Of these three, Royal Brackla was the first to be granted. The warrant was renewed in 1838 by Queen Victoria.

Released by John Dewar & Sons, Ltd. under the umbrella of spirit powerhouse Bacardi, Royal Brackla is a proprietary bottling of single malt Scotch in the Last Great Malts of Scotland series. This is the latest incarnation of the Royal Brackla label which has previously seen a series of limited releases. The initial September 2015 release of the latest Royal Brackla was limited to the Canadian, French, German, Japanese, Russian, Swedish, Taiwanese, British, American, and Global Travel Retail markets. Royal Brackla is also available in 16- and 21-year-old versions.

Royal Brackla is matured using first-fill Oloroso sherry casks. This is very apparent on the palate and finish, as the sherry notes are far from subtle. The key flavors that stand out above the others are dry sherry and black pepper, which can be a cumbersome combination. This juxtaposition crosses the line from complex to confused. There isn’t a delicate balance struck between the two, but rather a fight for attention. It feels like an argument in the mouth at times, punctuated by disappointing and awkward silences.

Overall, I found this Scotch to be more strange than intriguing.