For anybody who loves a good comeback story – or just a reminder that it’s never too late to change directions – Bruichladdich delivers. Founded in 1881, this Islay distillery has, like most Scottish distilleries, endured some challenging times, including a total closure from 1994-2001. Yet the visionary hand of Mark Reynier revitalized the distillery after he and a group of investors acquired it in 2000, ushering in kind of a late-career pivot that involved a lot more whisky, a lot more fun, and a lot more aquamarine blue.

Today, Bruichladdich is remarkable not only for its consistent quality, but also its versatility. Using historic Victorian-era equipment, it produces everything from delicately floral unpeated malts to, by general consensus, the peatiest whisky ever made.

But don’t let that reinvention convince you Bruichladdich’s lost touch with its roots. Late last year, Bruichladdich announced the release of three very old whiskies as part of a new Rare Cask series. Distilled in 1984, 1985, and 1986, these whiskies come from a relatively tight time span in the mid-1980s, but showcase a remarkable range of stylistic choices and flavor profiles.

The 1984 cask is for the purists: Distilled on New Year’s Eve, it was aged entirely in a bourbon barrel. The 1985 bounced around a bit, resting in gentle third fill bourbon casks until 2012, then moving to a first-fill bourbon cask before a final three-month ACE (that’s “additional cask enhancement”) in a French oak red wine cask. The 1986, the youngest of the three, was aged entirely in sherry: first in Oloroso, then re-casked into PX in 2012.

In a statement accompanying their release, Bruichladdich head distiller Adam Hannett noted that these whiskies are as old as he is, giving them a particular gravitas. My own birthday also falls into that span, and he’s right; contemplating the passage of time is particularly unavoidable when drinking a contemporaneous spirit. I find it’s a good mental space to taste from. Let’s get started. 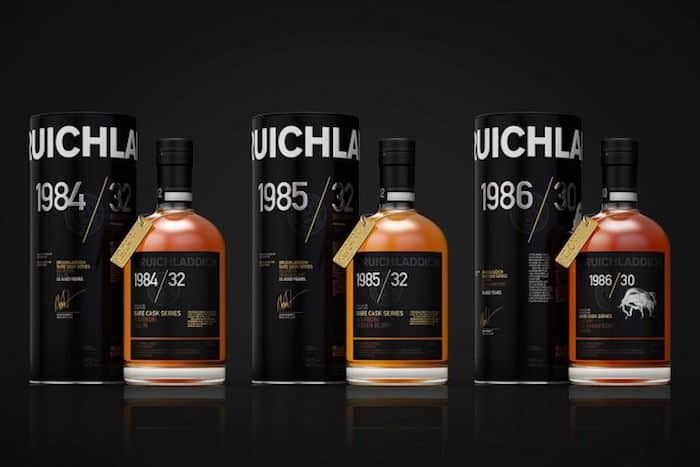 Palate: Contiguous with the nose: Pear, orange zest, grapefruit, gingerbread, plumped raisins, crispy sugar on top of a muffin, geranium leaf, morning in the garden, all leading into a long, dry finish with ginger, pepper, pear, marzipan, and slate.

Final thoughts: This restrained, extremely elegant dram just gets better and better the more time you spend with it. Like striking a bell – amazing clarity. Stuff like this is what makes people fall in love with whisky.

Palate: A full-bodied, ample palate with lots of sweet caramel and malt, dried figs, and dates. Citrus makes an appearance in the mid-palate with navel orange and grapefruit pith, plus a red fruit layer of musky blackberry and red plum that really amps up with a splash of water. Marzipan, stiff oak, and freshly turned earth round out the long, dusky finish.

Final thoughts: Oak is a big part of the story here, which makes this a bit more bourbon-like than the 1984, although the red fruit takes it in a somewhat surprising direction. This is a complex whisky that veers into fogginess, making it a little hard to pin down but, undoubtedly, engaging to drink.

Palate: Again, this is all about the sherry – big, hearty wallops of sherry flavor, toasted nuts, dried fruits, peanut butter, chocolate, raisins, the whole shebang – with a bit of struck match and rubber in the finish. After some time in the glass things mellow out and a musty old manor house comes into view: Musty old house, old oak furniture, leather, cigar, and a touch of tar. The mouth feel is thick and sticky.

Final thoughts: This is definitely a dessert whisky – maybe even a dessert on its own! For sherry lovers, this is the clear choice, although the intensity of the sherry covers up most of what I think of as Bruichladdich character – honey, malt, flowers.