Independent bottlings are an avenue by which enthusiasts can navigate lesser-traveled regions of the Scotch whisky landscape. These offerings run the gamut from undiscovered bargains to opportunistic, overpriced repackaging. Alexander Murray & Company is an independent bottler that supplies single malts and blended whiskies from a variety of distilleries to store shelves. Their lineup is extensive, and today we explore four individual single malt labels from their range.

While many of the individual single malts offered by Alexander Murray and Company feature a standardized label layout, the details provided for each incarnation are fairly thorough when compared to many contemporary distiller labels. The label design itself is clear and the design is classic. The paper used has a heavy linen texture. Additionally, bottles in this range include a wooden cap on the cork stopper which is embossed with the letters “AM.” Overall, the package is attractive and decently useful in educating the consumer. 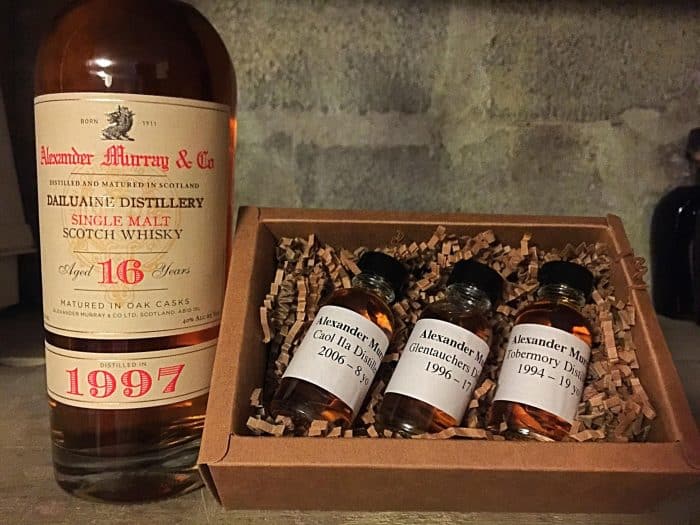 Dailuaine is a Diageo-owned distillery in Charlestown-of-Aberlour, Strathspey, in the Speyside region of Scotland. The whisky producer dedicates the vast majority (98%) of the single malt it manufactures to various blending operations, including Johnnie Walker. This bottling has a distilling date of 1997 and a 16 year age statement. Additionally, the whisky was matured in oak casks and bottled at a standard 40% ABV (80 proof).

Palate: Sweet off the bat. Notes of spiced apple cider with spikes of spice notes throughout. Decent mount of charred oak late in the palate with flashes of kettle corn. Delicate and subtle. A final flash of spice and warmth during the short burn. Some lingering notes of pepper and pear.

Final Thoughts: As a single malt, this whisky has a few things going for it. Depending on the amount paid, Dailuaine single malt can be either a bargain or a waste of money. The presentation of the flavors are not complex or challenging whatsoever. It drinks easily enough, but doesn’t really capture my attention in any tangible way. If purchased at a reasonable price, this is a suitable easy sipper or quality mixer. All things considered, however, the blends featuring Dailuaine may just be the best way to experience this malt.

Tobermory is a fishing village situated on the island of Mull in the system of islands off the west coast of Scotland known as the Hebrides. The distillery bearing the same name manufactures single malts which go on to wear labels of either Tobermory or Ledaig. The version presented here by Alexander Murray & Co. was distilled in 1994, and aged for 19 years. Today, the company also offers a bottling which was distilled in 1995 and aged for 18 years. This single malt is bottled at a standard 40% ABV (80 proof).

The presentation of the malt is muted overall. I found no real discernible points of considerable interest in the dram, but also no significant flaws. Fans of Tobermory will undoubtedly be happy to lay their hands on an additional vintage to compliment distillery releases, but this version is not mandatory for the casual sipper.

Yet another Speyside distillery, Glentauchers is situated near Keith. Chivas Brothers Holdings has owned the operation since 2005 by way of parent company Pernod Richard. Since its establishment in 1898, this distillery has dedicated the majority of its malts to blending operations. This is again an opportunity to try a malt on its own which you have most likely previously encountered in a far more common blend. The 17-year-old single malt is bottled at a standard 40% ABV (80 proof).

Nose: Very floral. A bouquet. Over-ripened grapes on the vine.

Palate: Sweet and soft. Delivers on the promise of the nose. Sweet and floral. Notes of cocoa, plums, hard fruit candies. Very light burn in the finish. Chocolate sweetness lingering.

This whisky presents itself in a similar fashion to the above mentioned Tobermory. There is nothing terribly distracting in the dram, yet not much to stimulate the senses, either. As a curiosity, it is interesting to partake in what is usually lost in a blend of other whiskies. As a standalone single malt, it is rather unexceptional.

Caol Ila Distillery stands on the northeast coast of the isle of Islay, overlooking Jura across the Sound of Islay. As with other producers reviewed here, this distilling operation provides Johnnie Walker with single malts with which to create their blends. In addition, the distillery offers a modest selection of their own single malts. Being from Islay, Caol Ila does indeed produce heavily peated whiskies such as the one reviewed here, as well as unpeated offerings. This version is bottled at — you guessed it — a standard 40% ABV (80 proof).

Palate: Salt and peat, just as with the nose. Notes of figs, toffee, peppercorn, and more peat smoke. Coal dust. Ash. Very soft burn. More of a prickle. Flash of peppermint and menthol late in the finish. Ash lingers.

Final Thoughts: I do my best to try to review each individual offering on its own merits alone, but this one is a bit of a challenge. Caol Ila is a distiller with which I am quite familiar as a producer of single malts, as well as their participation in blends. As such, I found this example of their Scotch to be lacking. As presented here, the package just never quite hits home as expected. Within the range of whiskies reviewed in this roundup, this bottle is the most reasonably priced. However, it is also the most underwhelming in what I know the distiller has to offer. The standard releases from Caol Ila are far more rewarding for your dollar.

All things considered, Alexander Murray and Company have developed an operation which has several admirable qualities. It is always a special treat to be able to experience a familiar dram in a unique way, or to discover a previously unknown distiller. The presentation of each bottle is attractive and helpful. The range of whiskies offered by the company is indeed impressive. As a sampling featured here, the lineup was a bit on the underwhelming side. With a little homework, a sharp-eyed collector is bound to find a treasure within the catalogue at large.