Whisky Review Round Up: Glen Scotia 15 Year Old and Victoriana 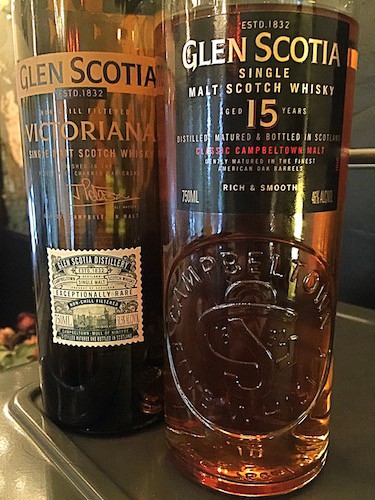 Campbeltown. Formerly a thriving hub in the Scotch whisky universe, the small region on the Kintyre peninsula once boasted up to 28 distilleries. But by the second decade of the new millennium, only three area distilleries continued production. Those faithful operations responsible for keeping the Campbeltown spirit alive, so to speak, are Springbank, Glengyle, and Glen Scotia.

As a brand, Glen Scotia has undergone a rather recent design change. Gone are the distinctive, love-em-or-hate-em opaque bottles which caught the eye but left one wondering if there was indeed any liquid contained within and how much. The 15-Year-Old and NAS (non-age statement) Victoriana offerings reviewed here are presented in more traditional bottles of darkened glass. The 15 in particular shares some general design commonalities with releases by Loch Lomond, which is appropriate as Glen Scotia is a part of the Loch Lomond Group.

This 15-year-old single malt from Campbeltown is the primary release of the current Glen Scotia lineup featuring an age statement. Neither the Victoriana nor Double Cask (not included in this review) bottlings offer age specifics. The 15-Year-Old is aged in American oak casks, and bottled at 46% alcohol by volume, or 92 proof.

Nose: Spicy and sweet. Candied ginger, cinnamon, and apricot right away. Charred oak becomes more pronounced after spending a few moments in the glass. Mandarin oranges join with solvent notes to give a bit of a cleaning fluid vibe.

Palate: Sweet, dry, and easy-sipping. Citrus zest, cinnamon and sugar, charred oak, simple table salt and pepper. There is a rather distracting note of grape Nerds candy that pops up in the mix. The finish transitions easily with oak taking the lead with a soft, lingering saltiness. The burn is short and mild, but definitely there.

Glen Scotia 15 is a pretty straightforward dram. There is a distinct lack of sour notes contained within, but there equally aren’t any true signature characteristics to grasp the drinker. To be honest, the grape candy note in the middle was the thing I remembered the most, and I would have rather not. All things considered, Glen Scotia 15-Year-Old is a solid and friendly single malt, yet lacking in definition.

Glen Scotia Victoriana is presented without an age statement. The single malt is aged in deep charred oak barrels selected by Glen Scotia’s master blender for their individual flavor characteristics. Victoriana is non-chill filtered and bottled at a more hefty 51.5% alcohol by volume.

Palate: Sweet and somewhat softer than expected from the nose. Salted caramel, coffee, mocha, chocolate almond milk, French toast with powdered sugar and maple syrup. The finish is salty with a sharp flash of a burn. Lingering mint notes.

The word which keeps returning in my description of Victoriana is “fun.” The dram is — like the 15 — simple and straightforward. Where it excels is in the fullness of its presentation. The whisky sips very easily and is a wonderful introduction to higher proof whiskies in general. The friendliness of the malt welcomes the sipper like stepping into a warm bath rather than tossing them into the deep end like, say, Lagavulin 12 Year.

When it is all said and done, Victoriana is a poignant argument within the Glen Scotia lineup that age statements alone are not everything in whisky.