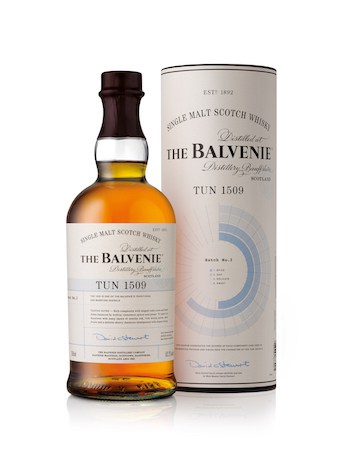 The ruins of Balvenie Castle stand watch atop a hill near Dufftown in the Scottish Highlands. Veteran single malt distillers William Grant & Sons lend the name a revitalized reputation the world over in producing The Balvenie line of Scotch whiskies, sharing space in their prolific portfolio alongside Glenfiddich. You may be familiar.

The actual physical Balvenie Distillery is the result of a 19th century renovation of the 18th century Balvenie New House mansion in Dufftown overseen by William Grant. The first distillation at the operation took place in 1893.

Steeped in tradition, The Balvenie continues to produce their own barley to this day. Additionally, while the vast majority of floor malting operations across Scotland are outsourced to specialty companies, The Balvenie maintains their own malting floor. Malt men turn the barley several times daily and oversee the introduction of anthracite and gentle amounts of peat once the barley is sent to the kilns.

The “tun” in The Balvenie Tun refers to an “oak marrying vessel” or what is essentially an exceptionally large cask. The number of the particular tun used in the production of this series is number 1509. The 1509 series follows the previous releases of The Balvenie Tun 1401.

Batch 1 of The Balvenie Tun 1509 was announced in December of 2014. Here we are exploring Batch 2 and Batch 3 in the 1509 series. To give a sense of how large a vessel Tun 1509 is, Batch 2 was created by bringing together 32 individual whisky casks. Of these, 23 were traditional American oak while the remaining nine casks were European oak which had previously held sherry. Batch 3 marries 31 casks together, specifically 12 sherry butts, 11 American oak hogsheads, and eight refill American oak butts.

Both Batch 2 and Batch 3 are presented at high strength, sans age statement, and non-chill filtered. As one can imagine, these are intentionally rather complex drams with The Balvenie itself referring to the series as a “…symphony…” while compared to the “…solo…” that is any of their series of single barrel bottlings.

Nose: Initially bright off the pour with iodine notes. The nose opens to show off sweet and fruity tones, most notably mandarin oranges with golden raisins and honey. As the dram opens further, there are oaky tones joining the fray.

Palate: Exactly as the nose suggested. A little bitey. Big, bold, sweet notes of mandarin orange, honey, and cinnamon raisin bread with butter. The transition into the finish is brassy and bright. There is a flare up of a burn initially which then settles into a sweet and smooth butterscotch candy aftertaste.

This is a fun ride of a dram, I must admit, if a tad uneven. Between this and Batch 3, I would say this one is the novelty tuxedo-print t-shirt to Batch 3’s silk bow tie and platinum cufflinks. There is a lot going on, and that is not always a compliment. The dram can at times feel frantic and overly excitable, which is a bit of a shame.

Ambitious to a fault, Batch 2 is swinging for the fences. I may be in need of my own tun for mixing any further metaphors.

Nose: Not as abrasive off the pour as Batch 2. Cinnamon rolls with buttercream icing, mandarin oranges, raisins, followed shortly by a subtle charred oak and the slightest hint of cigar smoke. Layered very nicely.

The layers here segue flawlessly. Loads of cinnamon toast, spiced plums, mandarin orange, golden raisin, ginger candy, and soft wisps of pipe smoke. Though the alcohol by volume on this batch is slightly higher than on Batch 2, the finish is far more rounded and full without providing nearly as much of a bite. Notes of rich toffee lingering long after the swallow. Marvelous.

Batch 3 is an absolute ripper from The Balvenie. This dram delivers a fully-formed experience that highlights the flexibility which skillful cask blending offers. There is a level of finesse in Batch 3 that takes the greatest themes of Batch 2 and polishes them to a mirror shine.

If this were a regular release, my personal bottle would never run dry. Should you find you are lucky enough to be eyeing this label in person, do yourself a solid and give it a spin. I find it hard to imagine that it could disappoint.