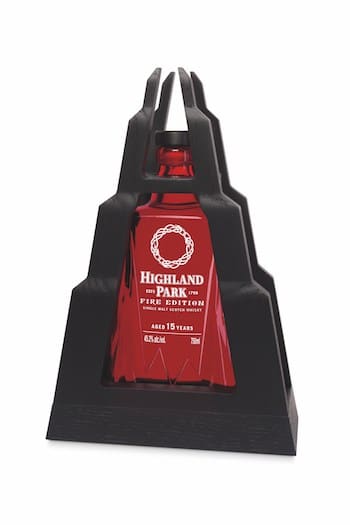 Many a distillery would count themselves rich to have a pedigree dating prior to the turn of the 19th century. Not so with Highland Park. It seems the northernmost distillery in Scotland is unsatisfied referencing merely their own storied history which reaches back to the distillery’s founding in 1798. Instead, this brand from the Island region of Scotland routinely references norse mythology imprinted on the area following the forced annexation of the Orkney Islands by Norway in the year 875 CE.

Highland Park’s Fire Edition is intended as the second and final release in a limited series when paired with the previous Ice Edition, forming a duo that pays homage to Norse mythology. Specifically, the Fire Edition calls into focus the mythical fiery destruction and rebirth of the world as referenced in the Poetic Edda.

In terms of a whisky, the Fire Edition is a single malt Scotch which is aged for 15 years exclusively in refill port wood casks. The finished product is bottled at 45.2% alcohol by volume and, according to Highland Park, does not have artificial color. The striking red bottle housing the liquid represents the realm of the Fire Giants and is presented in a dramatic wood cradle designed to form a matched set when placed on a shelf with the Ice Edition.

Officially released in November of 2016 by Highland Park, the 28,000 total bottles of the Fire Edition will be offered for a suggested retail price of £190 per 700ml bottle.

Appearance: The first thing I notice is that the lower portion of the cork has been stained red by the whisky. Highland Park notes that the color is natural. The port influence is apparent before pouring any liquid into the glass. In a Glencairn, the dram has a reddish hue, though the dominant tones are a deep jeweled amber and flashes of copper. Medium legs.

Palate: The port from the cork and nose is equally apparent in the palate. There is no denying the port influence at any point in the presentation. It is loud. Dry and sweet mingling with bitter. Notes of plums, red grapes, a light charred oak presence, with the entire thing underpinned with a base of malty vanilla. The finish is quite dry, which is very enjoyable. It feels appropriate and creates a bookended feeling surrounding the palate when combined with the port-heavy nose. The burn is relatively short and mild. There are lingering dry notes of chocolate-covered candied orange peel and a hint of fresh mint.

o need to mince words here. If you do not like port, Highland Park Fire Edition could be downright undrinkable for you. To refer to the port as an “influence”–as I have repeatedly–just does adequately prepare the drinker for exactly how much the port takes over the nose and palate. This does not feel like a mere port finish, and it shouldn’t. The Fire Edition marks the first time Highland Park has offered a single malt with this sort of aging involved. The end result calls to the drinker’s sense of adventure as much as the dramatic presentation.

All things considered, I struggled with my overall opinion towards the dram once all the marketing was stripped away and I was left alone with my glass. Funny enough, I found this was the same position I had been in when exploring Highland Park’s standard 15-year-old bottling. Perhaps there is something about this particular age of Highland Park that leaves me confused. I know that I like this whisky. However, just how much I like the dram remains elusive. Don’t you worry about me, though. I will set upon exploring my sample to the very last drop in search of my truest feelings.

80
Shares
1.2k
Views
Share on FacebookShare on TwitterGet Our Newsletter
Get The Macallan® Rare Cask at ReserveBar. Shop now!