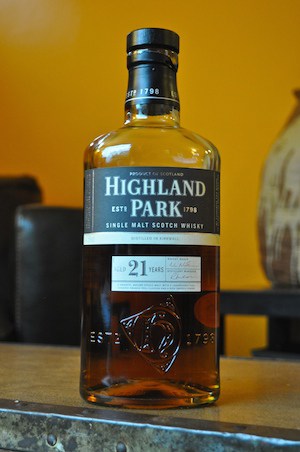 Highland Park 21-Year-Old was originally created as a travel retail exclusive, but after snagging a nod for Best Single Malt of the Year at the 2009 World Whisky Awards, the distillery made it a regular part of its regular lineup. For now, as far as I can tell, it’s only available in the U.K. (but if you’re there, you can order it from Amazon – how civilized!).

Located on Orkney Island and first licensed as a distillery in 1826, Highland Park is the northernmost distillery in Scotland, and it’s proud of its Nordic heritage—a seemingly endless font of inspiration for special releases. Over the last few years, Highland Park has leaned heavily into series inspired by the various mythological worlds of the Tree of Yggrdrasil, including its very popular “Valhalla” releases named for Norse gods (Loki, Odin, Freya, Thor) and its in-progress elemental series (so far we’ve made it through Ice and Fire), all complete with eye-catching branding, novelty bottle shapes, and big-footprint wooden cases shaped like Viking ships.

These irresistible-to-collectors releases have garnered a lot of press, but I’m still most excited by Highland Park’s core expressions, which embody the distillery’s distinctive honeyed style in a significantly more understated package. I still think that Highland Park 12-Year-Old is one of the best under-$50 single malts out there, so I was excited to taste this nearly twice as old version of Highland Park’s eponymous single malt.

Nose: At first, this is all dusky masculinity: leather, tobacco leaf, flamed orange peel, sherry, a subtle wisp of mechanical smoke. But then, near the end, an amazing freshness emerges, almost juicy, like a bowl of freshly sliced fruit salad eaten in an old leather armchair: orange slices, banana, ripe pear, grilled pineapple, even a hint of guava.

Palate: Again, there’s two parts to this whisky, although they dance around one another in perfect balance: First, a rich, mature, leather-and-cigars kind of flavor, with lots of dark chocolate and spice. Behind it, there’s a sweet, quenching fruitiness: tropical fruits poached in honey syrup, more oranges, unfiltered cider, dried apple rings, soft toffee. The finish, long and pleasant, is like snapping into a bar of dark chocolate. A little water amplifies the sweetness at the expense of complexity; I prefer it undiluted.

Yum! This is very, very tasty, and I’m secretly delighted that Highland Park didn’t jam it into a ridiculous iceberg-shaped bottle that takes up half the shelf. Wonderfully balanced and complex, if you’re traveling to the U.K. and see Highland Park 21-Year-Old for sale, don’t think twice—but maybe buy two.

64
Shares
1.3k
Views
Share on FacebookShare on TwitterGet Our Newsletter
Get The Glenlivet 18 Year Old at ReserveBar. Shop now!