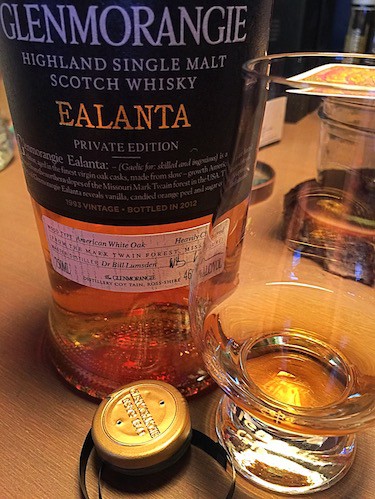 The Private Edition Range is a series of limited bottlings presented annually by Highland single malt giant Glenmorangie. As of the time of this writing, the sixth and most recent release in this series is Milsean. Ealanta was released as the fourth entry into the series.

“Ealanta” translates from Scottish Gaelic to mean “skilled and ingenious.” Now, reading such a proclamation across a whisky label may induce eye-rolling, so approach a bottle with caution. The labeling features no explicit age statement, yet does include both the vintage (1993) and bottling (2012) dates.

The accompanying literature tells a tale of Glenmorangie and Ardbeg Head of Distillation Dr. Bill Lumsden traveling to Missouri in the 1990s and meanders rather clumsily to mentioning Mark Twain. The purpose of this is to introduce the defining characteristic of this particular release, which is the cask selection used in its maturation. I know. Stay with me.

Rather than using ex-bourbon and ex-sherry barrels to age Ealanta, Dr. Lumsden chose to incorporate only virgin American oak barrels. The wood selection was inspired by his trip to the Mark Twain National Forest in Missouri, hence the shoehorning of one of America’s most celebrated authors onto a Scotch whisky label.

Glenmorangie states that the oak used to create the barrels was air-dried for a period of over two years. The fact that this was not followed by holding bourbon before eventually making its way to Scotland is what makes the selection truly unique. Glenmorangie Ealanta is bottled at 46% alcohol by volume.

Appearance: Vibrant amber in hue. Strong, oily legs which cling to the glass for a decent amount of time.

Nose: An interesting nose with a few pleasant contradictions to keep things lively. Both fruity and somewhat spicy with a little graininess mixed in for good measure. There is a softness and boldness mingling in the air just above the glass. Decent amount of cinnamon early on with very subtle oak and big note of soft butterscotch candies in wax paper, and butter melting on a warm sourdough biscuit. A nose so clean you could eat dinner off of it.

Palate: Unmistakably Glenmorangie. Sweet. Full, yet delicate. Slight bitterness in just the right measure to balance everything out. There is a cinnamon-roasted almond note throughout which has become somewhat of a trademark element in middle-aged Glenmorangie releases in my own experience. I find it quite welcome. The familiar Glenmorangie citrus zest is also present. Not nearly as oaky as one might expect, the years have mellowed the dram.

The finish is enjoyably long and soft. There are a few spice notes which whisper their presence late, but never speak up enough to derail the sweet and definitively drinkable dram.

Glenmorangie Ealanta is single malt of distinction and quality, to be sure. I found the entire presentation to be quite enjoyable, the rather cumbersome accompanying literature notwithstanding. In fact, I keep referring to Ealanta as “a bit of a stunner” in my mind. Being named World Whisky of the Year in 2014 unceremoniously strips the release of any claim to dark horse status, which is honestly a bit of a shame. The price it currently fetches on the secondary market as a result is flatly ridiculous.

The overall experience has an amount of overlap with the widely available 18-year-old Glenmorangie. With Ealanta being a roughly 19-year-old release, this should come as a surprise to no one. There was, however, enough of a separate identity from that whisky to justify this bottling, in my opinion.

On paper, the dram is certainly straightforward. Where Ealanta defines itself is in execution, which is simply masterful. This is a finely-crafted single malt, and a special one at that. Just how special is it? Well, that is a matter of debate. And if there is anything we malt lovers enjoy more than a dram, it is a debate. And a dram.