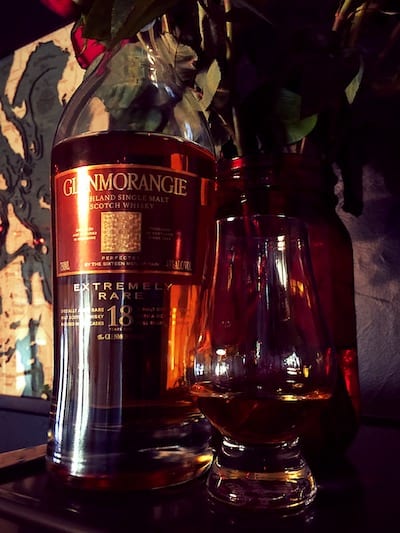 Certain whiskies seem to imply their palates in their own names. Glenmorangie certainly evokes specific flavor memories for me, though that may be informed largely by experience. In any case, when I encounter a dram from this Highland distiller I tend to expect clean, crisp, fruity flavors. Just the sound of the name on the tongue gives me images of fresh, ripe oranges and honey.

The Glenmorangie 18-Year-Old expression marks entry into what Glenmorangie terms their Prestige Range. As the name would imply, releases in this category are a step above the Core Range in terms of age and pricing. While the Core Range focuses on 10- and 12-year-old single malts, the Prestige Range opens with an 18- and continues up to a 25-year-old bottling. Additionally, non-age statement Signet and extra-aged releases distilled in 1981 (Pride 1981) and 1978 (Pride 1978) round out the category.

For Glenmorangie 18-Year-Old single malt, the distillers set aside their signature dram for 15 years in American white oak casks. After this point, approximately 30% of the whisky intended for the finished product is separated out to spend the last three years maturing in Spanish Oloroso casks, while the remainder stays in American white oak. Once a total age of 18 years for all the whiskies involved has been achieved, the isolated parts are reunited and bottled at 43% alcohol by volume (86 proof).

It should also be noted that the presentation of this whisky is intended to make a certain impression. The box housing the bottle is large and sturdy. This theme is carried forward to the bottle itself. I find Glenmorangie’s shapely bottles to be attractive in general, and this one is a superb example of the aesthetic. The glass is far more substantial than what is used in bottles for the Core Range, particularly in the base. I swear you could just about pound a nail into a 2×4 with this thing. (Note: do not attempt to use this or any other whisky bottle as a carpentry tool.) The stopper capping it all off is nice and heavy. The entire package just communicates quality. Absolute top marks for presentation in this regard.

Palate: Apricot from the nose transitions into the palate very nicely. Round, full, and silky mouthfeel. Rainier cherries, Lemonhead candies, light amount of malty cereal grain, chocolate-covered raisins, hint of oak. Continued apricot notes through the finish with a flash of cinnamon. Easy and light burn, though makes its presence felt. Balances well with the subtle qualities of the nose and palate.

The 18-year-old single malt category can be a crowded one. This seems to be a nearly universally agreed-upon age to be considered somewhat prestigious, and thus many distillers charge a hefty sum to acquire their more mature spirits. Read: some whiskies are overpriced simply because they are old, regardless of quality.

The price point for Glenmorangie 18-Year-Old places it more in the company of Glenfidich 18 or Johnnie Walker Platinum than, say, The Macallan 18. In terms of quality, however, I would argue that Glenmorangie is more on par with the latter of the three. I am even tempted to suggest that Glenmorangie 18-Year-Old deserves a seat at the table with The Macallan 18-Year-Old and Johnnie Walker Blue Label when it comes to discussing somewhat approachable luxury whiskies. Simply put, this is a fantastic whisky available at what has become a steal of a price.