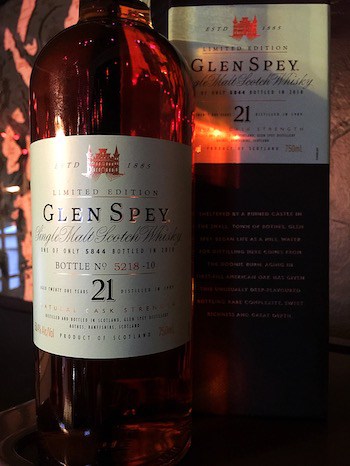 The Glen Spey distillery was originally established as a grain mill in 1878 by James Stuart under the name Millhaugh, or Mill of Rothes. Stuart was not one to rest on his malty laurels; he had previously acquired the lease to the Macallan in 1868 and set to rebuilding the now iconic distillery which he would eventually own outright. His stewardship of Glen Spey ended in 1887 with a sale to W & A Gilbey, whereupon the operation changed its name to Glen Spey. The London-based company had previously focused on creating gin, but took the opportunity to expand their portfolio into malt whisky.

If you guessed that Glen Spey hails from the Speyside region of Scotland, then you have earned yourself a gold star for the day, my friend. Time and circumstance were not always kind to the distillery. A heavy snowfall in 1892 caused the Glen Spey distillery roof to cave in. Fate seemed to seek cruel equilibrium from this frozen setback as a fire gutted the distillery in 1920. The warehouses and still house survived and the entire site layout was redesigned and rebuilt in order to maximize on efficiency.

The distillery was redesigned yet again in 1969, further seeking to streamline production and to double capacity. Glen Spey has been under the Diageo banner since 1997.

Most of what is distilled at Glen Spey is destined to contribute to J&B and Johnnie Walker blends. After all, this is a Diageo property we are discussing. Today, there is a 12-year-old bottling of Glen Spey offered by Diageo.

This 21-year-old version was in distilled in 1989 and bottled in 2010 as a very limited run of 5,844 individually-numbered bottles. In an age where companies are touting the “limited” nature of releases that are measured in the tens of thousands of cases, this release is actually significantly rare. Incidentally, my bottle is number 5,218. The whisky itself was aged in American oak ex-bourbon and ex-sherry casks. The final product is bottled at a natural cask strength of 50.4% alcohol by volume (100.8 proof).

Vital Stats: 50.4% ABV (100.8 proof), aged 21 years, 100% malted barley, this long discontinued limited edition currently fetches upwards of $250 on auction sites, though there are a scattering of retailers which may still have one.

Nose: Somewhat bright. Packs a little bit of a punch on the nose, but it is a friendly one. Crème brûlée, cinnamon baked apples, hint of grilled pineapple with teriyaki. The alcohol content gives it a wisp of industrial chemicals, but it is overall matured and mellowed. Revisiting the nose after a few minutes (and nip or two), there is an interesting dill note that was not present before, which adds a fun layer.

Palate: Soft and sweet, especially when considering the ABV. Luscious mouthfeel. Very nice. Flavors of fresh, unbaked pie crust, with a touch of vanilla, honey, and pear. All the flavors are mingling exceptionally well. The transition to the finish is an absolute delight. This is where the cask strength really pays off. Without the long and substantial burn, I think the dram would become sickly sweet and unbalanced.

The finish is the star of the show here, which is saying a lot considering how enjoyable the nose and palate are. No huge notes lingering in the aftertaste. Simply a remnant of the burn with soft sweetness hanging on. Quite well done.

My first thought is that this is a fantastic introduction to cask-strength whiskies for the newcomer, though not the most practical one. (Ain’t that always the way?) My curiosity was piqued by the labeling before cracking the seal on the bottle. A limited expression from the Diageo stable is bound to catch the eye, but seeing terms such as “natural cask strength” gracing the label of a whisky old enough to legally drink itself further enhances the allure.

This could have easily been yet another bottling of a forgettable single malt which only benefits from getting lost in a larger blend. The presentation here saves the dram from that fate. I find myself wanting to get to know Glen Spey more closely as there are subtleties and nuances here that are deeply gratifying. The flavors are expressive and layered. The finish is borderline legendary. Limited editions should always leave the consumer wanting more without feeling like anything was missing. Glen Spey 21-year-old is how limited editions are properly done.

Shares
695
Views
Share on FacebookShare on TwitterGet Our Newsletter
Get The Glenlivet 18 Year Old at ReserveBar. Shop now!