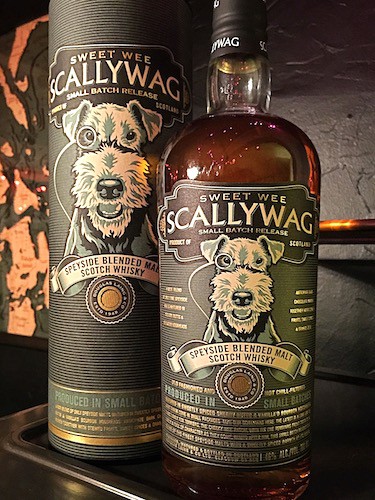 Independent bottlers offer unique presentations of familiar drams and complete reimaginings of tired labels. As risky as these bottlings can be, there are a few independent outfits who have made a name for themselves by bringing quality and consistency to the forefront.

Douglas Laing & Co has been in operation since 1948. While their considerably deep modern day catalogue offers a variety of single malt bottlings, the company is perhaps more commonly known for their range of signature blended whiskies, referred to by Douglas Laing as Remarkable Regional Malts. Rock Oyster is the Island region’s entry into the series. The lineup is further rounded out by The Epicurian (Lowlands), Timorous Beastie (Highlands), and the appropriately named Big Peat from Islay.

Additionally, the Speyside designation on the label indicates to the consumer that all of the single malts involved in the process were distilled in the Speyside region. Specifically, the distilleries of Mortlach, Macallan, Dailuaine, Inchgower, and Glenrothes are named as contributing to the blend. Ex-sherry butts and ex-bourbon hogsheads are used in the maturation process. Douglas Laing & Company presents Scallywag without the addition of coloration or the use of chill filtration.

Nose: Buttery sweet initially. Sherry makes itself apparent as the nose opens up in the glass after a few minutes. Light flashes of wet, green oak late.

Palate: Moderately oily mouthfeel. The palate opens sweetly with dry sherry taking the lead above malty vanilla with orange zest and transitions quickly into spiced and vegetal notes. Black pepper, charred oak, freshly cut grass clippings. The oil leaves a feel of ash on the tongue into the finish, which is suitably dry. The burn is of medium intensity and decays a bit too rapidly for my preference. Aftertaste is of malt and black pepper. There is a hint of a tang late not unlike licking the top of a 9-volt battery.

A fun blend, though a bit uneven. Brings to mind a wet dog shaking himself dry in the living room. While there is not a tremendous amount of depth to the dram overall, there is something amusing about it. No doubt, there is a certain level of charm in the presentation. Let’s be honest. Who among us can resist a dog grinning to reveal a single remaining front tooth while wearing a monocle?

I love what Douglas Laing & Co bring to the table as a producer. Their products are presented with style and accompanied with crucial information regarding their contents. As malt blends go, however, Scallywag is not the head-turner I had hoped it would be. Perhaps the mistake was mine for allowing my expectations to run ahead of me. If you should find yourself in need of a blended malt, you could do far worse than Scallywag. Unfortunately, for the price you can also do a lot better.

61
Shares
2.7k
Views
Share on FacebookShare on TwitterGet Our Newsletter
Read More Whiskey News
Whiskey Review: Cascade Moon Edition No 1
Cheers to the Dads! Personalize a bottle of his favorite whiskey to create a modern gift for the modern man. Use code: FATHERSDAY20 for $20 off your next order of $100 or more at ReserveBar