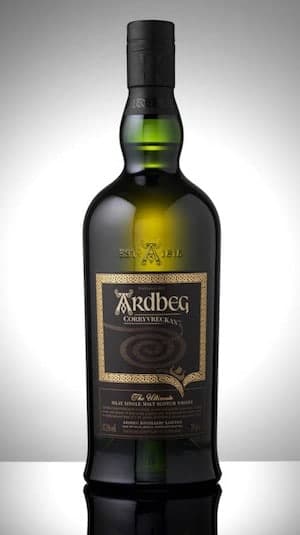 With a history stretching back to the distillery’s founding in 1815, Ardbeg has been many things at many times. What we have come to expect as a quality single malt available each and every time we enter our local retailer was not always so. The 80s and 90s saw the distillery suffer closings and shockingly limited periods of distillations of small batches which were intended for blends. The Ardeg we recognize today largely owes its identity to a purchase of the operation by Glenmorangie in 1997. The twenty years — oy, are we feeling old yet? — from then until now have shaped Ardbeg into a powerhouse of Islay single malt.

In addition to a series of limited releases which appear and disappear with fairly annual regularity and other high-end bottlings, Ardbeg offers up a trio of single malts known as their Ultimate Range. Within this collection is the 10 Years Old, Uigeadail, and Corryvreckan.

Corryvreckan began life as a release exclusive to the Ardbeg Committee. The earliest tan-labeled edition is a prize amongst collectors today, but many an Ardbeg enthusiast continues to hold a grudge against modern Corryvreckan for taking the place of their beloved Airigh Nam Beist. What’s to be learned from the sudden comings and goings of the current Scotch whisky market is to live in the moment and invest deeply in those labels you hold most dear, as nothing lasts forever. Enough philosophizing over a lineup change. What’s in the bottle?

Well, Ardbeg holds its cards quite close to the vest with the majority of their current and recent releases, none more so than perhaps Corryvreckan. The box housing each dark green bottle of this incarnation of Ardbeg has no shortage of words. In fact, words are all over this thing. Many of these words are quite pretty and dramatic. From perusing the box, our intrepid sipper is inspired by their own bravery on account of the label posturing this single malt as an adventure in itself. Details inform the reader that the dram is named for a storied whirlpool which is located just to the north of Islay’s neighboring isle, Jura.

The literature adorning the packaging continues to meander through legends of daring while deftly avoiding divulging too many particulars on the whisky itself. Cask selection is not mentioned, nor is age. Ardbeg does state that Corryvreckan is a single malt Scotch whisky from Islay which is bottled at 57.1% alcohol by volume and…that is about it. Other Ultimate Range offerings either feature age statements (10 Years Old) or at least details on cask selection and the use of non-chill filtering, such as with Uigeadail. Not so with Corryvreckan.

Palate: Sweet from the very start with smoke and salt taking over in a very elegant flow. Light, silky mouthfeel similar to cotton candy dissolving on the tongue. Lemon cake, table salt and pepper, a slightly over-baked croissant, soy sauce, a hint of bacon. A bit fiery on the finish. There is a brassiness that wakes up the tail end of the palate and hangs on afterwards. Lingering toffee, smoke, and cinnamon sugar notes.

When I strip away my frustration regarding Ardbeg’s decision to package this release as the very definition of style over substance, Corryvreckan is just a fun, fun Ardbeg. It has been a divisive dram over the years, and it has certainly earned a lot of the ire on its own merits. Disregarding that, I feel that the whisky holds its own as a delicious representative of Islay peated Scotch. I would not go so far as to say it is the Ardbeg to have in your cabinet. For that honor, I would point experienced sippers toward Uigeadail. For the newbies, I would recommend Ardbeg 10 Years Old.

For my own experience, Corryvreckan is the bright and punchy entry in the current Ardbeg stable. It invites the sipper to hold on for dear life, and I personally love that in a whisky. Unfortunately, it can be difficult to divorce the experience in the glass with the fluff on the box. If only the legends came peppered with facts, the entire presentation would be that much more inviting. As it stands, it is a good Ardbeg. It is not a great one.