Charlestown of Aberlour is a village situated in the Speyside region of Scotland near where the River Spey and Lour burn meet. The name derives from the original Scottish Gaelic “Obar Lobhair,” which itself translates to “the mouth of the chattering burn.” A distillery was established locally in 1825, and operated in the area until 1833. The Grants – James and John – who ran the original Aberlour distillery went on to establish Glen Grant in the village of Rothes. The modern incarnation of Aberlour was established by James Fleming in 1879. Aberlour is currently owned by Chivas Brothers Holdings via parent company Pernot Ricard.

The lead-up into the new millennium saw Aberlour introduce A’bunadh to their range of single malts. The whisky is matured exclusively in Spanish Oloroso sherry butts. Each release of A’bunadh is limited and granted a batch number.

At the time of this writing, batch 56 is the most recent to grace store shelves. The bottle we are reviewing today is batch 46, which dates to around 2013. A’bunadh does not feature an age statement. In addition to a batch number, each release is marked by an individual bottling strength as the whisky is presented in original cask strength. Batch 46 is bottled at a hefty 60.4% alcohol by volume (120.8 proof). Aberlour A’bunadh is also non chill-filtered. 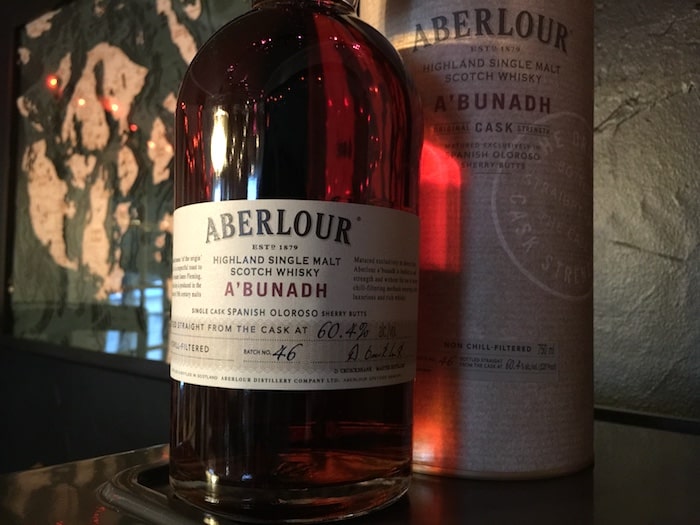 Appearance: Deep ruby red in the center of the glass, pushing towards stained cherry wood around the periphery. No subtlety whatsoever regarding the sherry influence. Medium legs.

Nose: Nothing subtle about the nose. It is bold. Prunes, tart cherries, plums stewed with cloves, hint of new make sprit no doubt due to the strength (60.4% ABV) of the bottling. A hint of gingerbread, fruitcake, and a random flash of fresh cut lavender after sitting in the glass and opening up for several minutes.

Palate: I hope you like sherry. Like the nose and appearance, nothing at all subtle. Huge sherry note. Very warm mouthfeel, again, due to the high strength of the bottling. Full and almost heavy on the palate. The first sip packs quite a bite on the tongue and set the lips tingling, but subsequent visits to my glass find the dram much more inviting. In fact, it opens up some interesting layers once the shockwave from the sherry bomb passes by.

There is a bit of granny smith green apple, fresh fennel, not dried, a bit of fig and mint late. The burn is intense, but not unpleasant at all. It is a fresh transition that suits the nose and palate. Overall, really fun and well-balanced.

Aberlour A’bunadh is the whisky you bust out for that friend who can never seem to taste the sherry expertly mingling with your Macallans and Glenmorangies. This is a niche bottling, to be sure. A large part of what personally attracts me to the world of single malt Scotch whisky is the depth and diversity of experiences to be found across the industry. I love a dram with character, and Aberlour A’bunadh has it in spades.

While there is certainly something to be said for the consistency provided in a finely-crafted blend, the sometimes unpredictable nature of a small batch single malt appeals to my sense of adventure. You can definitely expect a wild ride when you open a fresh bottle of A’bunadh. Aside from that, be prepared to become aquatinted with the individual nuances of your specific batch.

52
Shares
1.3k
Views
Share on FacebookShare on TwitterGet Our Newsletter
Read More Whiskey News
Whiskey Review: Laws Whiskey House Four Grain Straight Bourbon
Cheers to the Dads! Personalize a bottle of his favorite whiskey to create a modern gift for the modern man. Use code: FATHERSDAY20 for $20 off your next order of $100 or more at ReserveBar