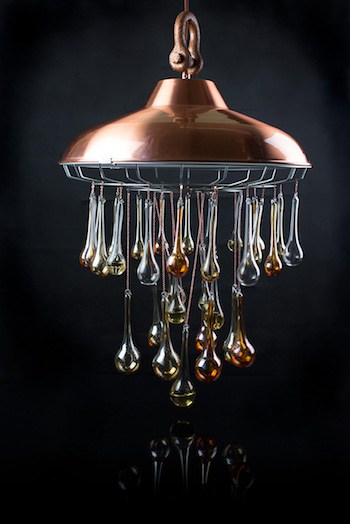 Crowdfunding campaigns are notorious for the various perks one gets depending upon the level of contribution you give. The higher the give, the more snazzy the give back. This certainly holds true to one ongoing crowdfunding push from Angels’ Share Glass, attempting to build a Scottish glass blowing studio and offering as one of the more top end items “an exclusive glass chandelier featuring whisky-filled drops.”

This Whisky Drops Chandelier, as it is being called, was designed by Angels’ Share Glass glassmaker Bee Hardy, who has a background in creating lighting, and handmade by Hardy and the firm’s co-director Karen Somerville. There are four available at the £500 (around $710 USD) level.

“We’ve always had great feedback about our signature product – glass angels filled with whisky – and we thought wouldn’t it be amazing to have a chandelier featuring whisky in the same way,” said Somerville in a statement. “Bee and I chatted through some ideas before she came up with her fantastic design featuring a copper fixture with long glass drops coming down which are either coloured or filled with whisky.”

As for the reason for the crowdfunding effort, the company “wants to increase production and train up a new generation of glassmakers to continue its legacy.” Co-founder Tom Young currently works out of a home workshop where he trains an apprentice, so it is hoped the £25,000 campaign will net the funds to build out the state of the art glassmaking studio.

“So far people have been incredibly generous with their donations and we’re genuinely touched with the amount of support we’ve received from customers, friends and business colleagues in our local community and from much further afield,” added Somerville.

If you miss out on the chandelier, worry not – it is possible Angels’ Share Glass may develop more if they prove popular during the fundraising period.

278
Shares
158
Views
Share on FacebookShare on TwitterGet Our Newsletter
Cheers to the Dads! Personalize a bottle of his favorite whiskey to create a modern gift for the modern man. Use code: FATHERSDAY20 for $20 off your next order of $100 or more at ReserveBar