Smart. Sassy. A spitfire of energy moving around the room educating people about her distillery’s whisky. These are just a few of the things describing Jennifer Wren, the west coast ambassador for popular Scotch label Glenfiddich. Wren, a former stage actress from New York, brings the skills learned from that trade into the world of brand ambassdoring, representing a new breed of ambassador infusing presentation ability with in depth knowledge of the whisk(e)y they are talking about.

I recently had the chance to catch up with Wren when she came to Portland, Oregon to talk about Glenfiddich. Note this interview is edited for clarity and flow of thought. 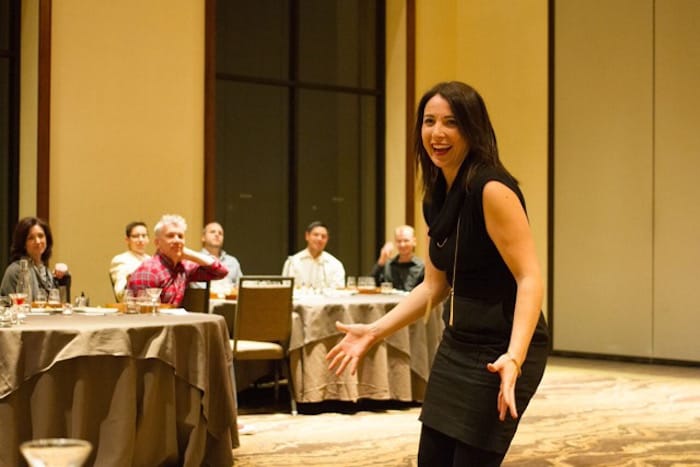 The Whiskey Wash: We’re here with Jennifer Wren from Glenfiddich. Jennifer, can you tell me a little bit about what being a whiskey ambassador means to you?

Jennifer Wren: It’s actually a question that a lot of people who want or aspire to do this job, whether for Glenfiddich or for other wonderful whiskey labels, ask me. They always say, “What is it like? What do you do? What’s your day like?” And I’m like, “Well, okay. Picture this. Five days a week, you have a full-time admin job. You answer email. You schedule. You help with logistics. You coordinate with your local teams. You’re on conference calls with the brand. You’re on conference calls with your local team. You shake hands with distributors. There’s all that, but then also you have a full time hospitality job.” As soon as that day ends, you go to an account and you do an event. You host the event. You talk to public or you talk to trade. I drop into Portland. I go to multiple accounts that are champions of Glenfiddich. You may do that as late as, within your own limitations, till 7 or 8 or, in my case last night, 2 in the morning or whatever. Then you wake up the next morning and you get on a plane, then you land somewhere. It could be your house. It could be some other town, and you do it all again.

I always say the thing about being an ambassador, it’s a combination role of being the literal breathing representation of the brand when you are in a city. You are being the hostess or MC for constant events. You’re also logistics and you’re coordination, and you are, above all things, a politician. You wear a lot of caps.

TWW: In doing research about your background, I came across a venture called Whersky. Tell me a little bit about it – seemed interesting as I was reading on its goals.

Wren: Yes it’s kind of, unfortunately, laying fallow at the moment.  [When doing some work with a former team  for Ardbeg] I began reaching out and getting to see other brands and had some long conversations. It was a very diverse team [I was on] both in ethnically and gender. I kept noticing, as I was approaching whiskey or talking about whiskey, there was no representation in the whiskey world, first of all, of women and, secondly, of people of color, at all.

TWW: Expanding on this, what is that like for you, coming into the space and bringing a new kind of energy and opposite gender view?

Wren: First of all, I hate to sell horror stories. I think that there’s not a lady in the industry that doesn’t have them. I certainly do, but I’ll tell you my experience in a little story, something that happened in my life. I don’t name names. I never name names. I don’t think it’s nice to hear.

I went to an account in the city, and there was a gentleman there who owned a brandy account. I come in with my little logistics team. 95% of my logistics team are female, and they tend to be young. Not on the whole but they tend to be something like maybe 35 to 25. Usually, when I walk in, it’s me and my local portfolio marketing manager and maybe a couple of local brand ambassadors, like associate brand ambassadors, who tend to be female and very attractive. We come and we’re setting up the whole event. The room is all nice and it looks amazing, so I’m sitting there checking my email. The owner comes at me and goes, “We’re starting in 5 minutes.” I was like, “Yeah, it’s great. Everything’s set up, man. Everything’s great.” He goes, “No, no. We’re starting in 5 minutes.” I said, “Yeah, you can feel free to let people in.”

He was like, “Seriously? Okay, whatever,” storms off. I led the class and then I opened it up to questions. There’s over 45 minutes of some of the hardest whiskey questions I have ever been asked in my life. I mean these guys were very nerdy whiskey aficionados, and I’m asked process questions, and history questions, and scotch questions, and industry questions. After it’s over, he walks back up to me and he goes, “I want to apologize. First of all, you’re really good at what you do. You’re a really good speaker. Second of all, you obviously really know what you’re talking about. I was really rude to you.” That is my experience.

There’s never a moment even still that I do not have to prove myself. I think there are so many women in the industry that would agree me. But yeah, I walk into a room and I always have to prove it.

TWW: Some ambassadors we’ve talked to, they’ve travel a few days out of the month. Talk a little bit about how much you travel a year and what that is like personally and professionally.

Wren: Since I started the job, which was in June of last year, I will travel about 300 days from calendar year June 2015 to calendar year June 2016. This is not normal. The reason this happened is we launched Glenfiddich 14. When I came to the job, I not only had all the normal expectations of the brand ambassador position, but we were launching [a new whisky] at the same time. I had to fulfill all my normal expectations and do all the 14 events, and complete my induction trip and the global trip, while learning the job.

Going into where we are now, January to June, this is normally when you’d be fulfilling your regular job obligations, going in and doing events in town and doing lectures in whiskey clubs and talking, not squeezing it all in at the end of the year. Even my boss said to me, “If you can survive this first year with that launch, you will be fine.”

It’s just that these first six months were so intense. It was for the whole Glenfiddich team. It wasn’t just me. It was every single person involved. I think that going into the next calendar year, I’ll probably travel something like maybe 250 days, which is not that much less but it’s significantly less for your mind and your heart and your body. I do worry about getting sick all the time, because I have to be on [all the time]. I have to make sure that if I committed to seeing you, then I’m bringing my best self for you. When I commit to doing an event, I need to be my best self for those people in that room.

Wren: Often, in my tastings I will discuss the most effective way to nose a whisky (or other high proof spirit) by using the wafting method in lieu of ” jamming your nose in the glass.” I will often, also, bring up the possibility of “anosmia” or, in then case of whisky nose fatigue, “dysnosmia” or temporary loss of smell.
A little known fact about me is that I have an incredible vocabulary, but an old head injury that causes an the occasional malapropism. So, I think I’m saying one word, but a a closely related one pops out. You can only imagine the possibility for hilarity.

One night, after a very successful pairing dinner, an older fellow comes up to me and says, “Hey that was really wonderful, but I need to correct you on one thing.”  I immediately put on my polite oh-god-its-local-whisky-expert-lecture-time-smile to patiently accept his “suggestions” for my next presentation.

He goes on, “See, I’m a physician and you were talking about anosmia, yes?”

“Yes, in relation to nosing the wrong way or nosing too many spirits without a break.”

“Well, I chuckled because you actually said ‘anismus’ . . .”

“Yep, and that means that if you nose too many whiskies incorrectly your pelvic muscles will lose the ability to properly relax when you defecate.”

TWW: And on that note, let’s wrap. Thanks for your time.