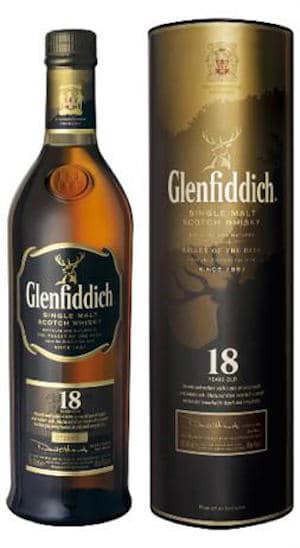 Editor’s Note: The Whiskey Wash welcomes Joshua St. John to our writing staff. Also, this whiskey was provided to us as a free sample to review by the party behind it. The Whiskey Wash, while appreciative of this, did keep full independent editorial control over this article.

One would be hard-pressed to find a liquor department without a representative of the Glendfiddich line. The world’s best-selling single malt is among the most recognizable offerings gracing store shelves. Ironically, the brand can get lost in this position with many adventurers looking for more exotic labels. There are many reasons why Glenfiddich has held such a dominant position in the industry, but chief among these should be what is contained within the trademark triangular bottle.

Found for a bit over $100 in most markets, the Glenfiddich 18 Year Old variation is the most expensive of the typical three labels available at most liquor stores, sharing shelf space with the 15 Year and 12 Year offerings. This standard lineup offers a unique chance to compare how aging can affect a particular product. Too often an age statement can be seen as a singular indicator of quality rather than simply one additional piece of information regarding the makeup of the overall product. Read: just because it is older doesn’t mean it is better. I definitely found this to be the case with here.

For many — myself included — Glenfiddich serves as a kind of true north in the world of non-peated single malts. The 18 Year is undeniably Glenfiddich. Bottled at 40% alcohol by volume (80 proof) and matured in Spanish Oloroso and American oak casks, the golden amber appearance adds a sophistication to the most modest of tasting glasses. The legs are respectable, though they tend to retreat a bit quickly.

The nose was pleasant and again held no surprises. There are light floral notes mixed with fruit and a distinctive malt aroma that is inviting and exudes quality.

Tasting this version for the first time, I have to admit to being somewhat disappointed. It was not a bad drink by any means. It was more akin to listening to a favorite band which had reunited for one last ill-fated album. There were all the hits I expected from Glenfiddich; sweet, warm caramel mingling with cinnamon apple and a hint of sherry. The problem came right after the sip. The fire just didn’t warm me as much as I would have preferred.

The finish would serve as a friendly introduction for newcomers to the world of Scotch. For me, the abrupt ending left me more confused than anything. A pleasant conversation had been dropped mid-sentence. I would identify this as a defining characteristic of the drink, unfortunately.

All things considered, there is nothing regrettable about this release. The problem is knowing that there is a superior product for a lower price sitting in the 15 Year bottle directly next to this one.

I rate Glenfiddich 18 Year Single Malt Scotch Whisky 88 out of 100. You can find a bottle of it for sale online from a range of retailers at an average price of over $100.