The Glenfarclas scotch whisky distillery has been owned and operated by the same family for 130 years in the Speyside region of Scotland. No, it’s not small by any stretch, but neither is the distillery a tentacle connected to some international “kraken” of a corporation. It’s a family affair.

Maybe that is part of the reason George Grant (the owner) and his crew avoid the practice of finishing whiskies in different casks prior to bottling. Instead of moving spirits around like a game of musical chairs, everything stays put in dunnage warehouses. Eventually, after enough time has passed, the relevant casks are selected and combined for a bottling run. 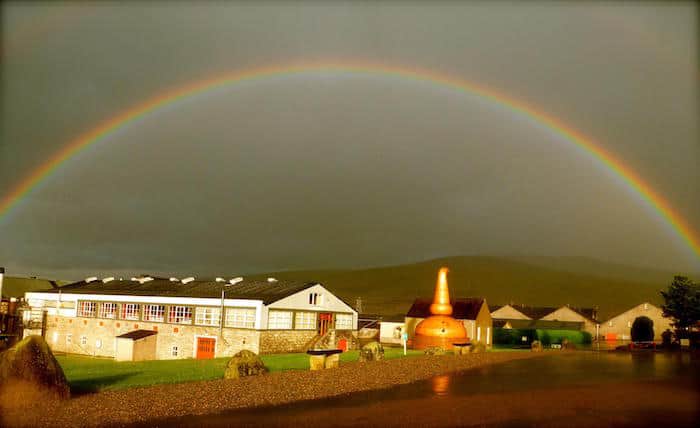 You won’t encounter any slick advertising campaigns associated with Glenfarclas. The distillery tends to rely more on quality offerings to generate sales through word-of-mouth. Believe it or not, single malt scotch can still be made (and sold) the old-fashioned way! Nearly seven generations of family ownership, pride, and know-how are thoughtfully put into every bottle of George’s whisky.

Here in the United States, Glenfarclas offers 10, 12, 21, 25, and 40 year-old whiskies, in addition to what the distillery calls “family casks,” which are typically labeled by the year from which they hail. These limited offerings, bottled from single casks, often have fairly generous ABV’s. They are not chill filtered.

It’s worth mentioning the 25 Year, 40 Year, and 105 Cask Strength are not chill filtered, either. And it goes without saying no Glenfarclas offerings whatsoever have E150a artificial coloring. What you see is what you get! If the color in a bottle looks deep and rich, it is! All color comes directly from the sherry casks used to age George’s whiskies.

Nose: Speyside interplay of fruit and malt; a bit of sherry wood emerges; cloistered marine air; honeyed wafer; muscats (white raisins); sharpness reminiscent of the glue on packing tape (some might call it “plastic” but not in a bad way); plain yogurt.

Comments:  The ten year is not my favorite whisky in its class, but it isn’t bad either. I would certainly rank it above quite a few mid-priced blends. I was tempted to try the sample with ice, but I’m just not an ice type of guy, so I couldn’t bring myself to do it. This said, I think it would be delightful on ice for those who enjoy a chilled glass of whisky.

Palate: Migrates from middle of tongue to the tip and then covers the whole tongue pleasantly; delicate creaminess; mild barley; roasted chicory but not too bitter; caramelized sugar; oak creates the illusion of smoke in a gentle puff that mingles again with the sweeter notes.

Finish: Seems as though it will be medium long but then keeps hanging on unexpectedly with additional evolution; affects the whole tongue; creamy swirling admixture of white chocolate leaves the fruit behind while hints of oak stay in the background; very mild echo of cigar ash hangs around for well over a minute.

Comments: Do not be too hasty while drinking what you pour. The 21-year-old benefits from time in the glass. I can only describe this whisky as surprisingly mild, and yet its forgiving nature does not hinder the promise of complexity.

Palate: Silky-smooth mouthfeel opens to reveal caramelized notes that mingle with candied orange peels, more hazelnuts, marshmallow,and  slight oak bitterness that only ignites if the tongue is “smacked.” In addition, there are hints of chartreuse jaune, as well as aniseed that emerge.

Finish: Extends into the whole mouth and throat, but remains on the tongue longest with waves of caramel and marshmallow nougat; oak is very faint yet omnipresent; deep and complex richness hovers in the balance, never committing fully to sweetness or to nuttiness. One is left with a slight hint of coffee beans.

Comments: This whisky is hard to pin down and benefits greatly from inhaling the scent as one sips. The introspective sipper will enjoy exploring all that it has to offer. Dunnage warehouses beckon: a philosopher’s dram.

Nose: Floral and spicy notes combine to reveal juicy citrus notes, cedar, ham-like meatiness, leather-bound books, alpine meadows, heather, and finally a well-rounded presence of sherry without much in the way of oakiness (which is surprising, given the age).

Palate: Lovely attack that brings 60% cacao, dried fruits like raisons, figs, and dates; then comes a wave of sherry that echoes the savory note (honey-glazed ham). Very complex! As the mouth salivates, leather emerges, along with a brush of vanilla beans. Graham crackers rise up when the fruit is gone, and then dry out quickly into seasoned oak that is not bitter.

Finish: Long and decadent, it vacillates between sweet and leathery notes. The death is hard to pinpoint due to the length of this finish. Resurrections of dried fruits, white chocolate, and sherry continue to enchant the senses, albeit sporadically.

Comments: Good gawd, the recent batch is surprisingly fresh, and not over-oaked in the least. It has more power than either the 21-year-old, or the 25-year-old, and that is good news when it comes to depth and complexity. Why? Because this old-timer has enough oomph to dazzle one’s senses without gettin’ bossy. The journey is transcendent, to be sure. After your glass is empty, you almost feel as though you’ve been left in the middle of the desert without a ride home. “Where am I?”

The fascinating thing about this dram is the way it evokes different scents and flavors at different times. Even consecutive sips vary. With fifteen minutes in the glass, sherry notes deepen for the nose, and the palate catches more spicy tart notes that remind one of ginger, nutmeg, and some tobacco. Leather notes fade in time.

Do not rinse out your empty glass quickly! Even the dried remains of your once-epic dram are worth sniffing. In fact, I nosed my empty glass repeatedly while I finished typing this whisky review. Does that sound too sick and wrong to admit? As the punk rock band Devo sings, “I look for sniffy linings. . . .” Ah, well, no matter. The secret is out: yes, I am obsessed with good single malt scotch.

Mouth: Without water, the taste is somewhat one dimensional with honey comb, fresh dried barley, turbinado sugar, and the mustiness of young spirit. With a few drops added, the bottom drops out and a wider field of play allows for a mouthfeel with well-rounded sherry, smoke (from the cask wood oils), Fig Newtons, blackened Anaheim peppers, vanilla bean, orange peel, marzipan, eucalyptus, and mince pie.

Finish: Medium length at cask strength. With the introduction of water, the oral tissues in one’s mouth quickly recognize that the medium finish had simply been the result of the high ABV (shrivel up!). A kind of figgy-oloroso dried fruit impression clings until the death in a short-to-medium length of time.

Comments: The 105 is a very respectable NAS offering does not disappoint. I found the sample that I reviewed today to be quite a bit better than a dram of Glenfarclas 105 that I sipped a few years ago at Highland Stillhouse pub in Oregon City.

Despite the fact that I did not review it this time around, a bottle of Glenfarclas 15-year-old in my liquor cabinet currently suffers from a case of sulfuritis (although, thankfully, it is not evident on the nose). Often, sulfur can lessen over the course of time. I’m willing to bet that the fairly strong “gun powder” will gradually fade (my bottle was opened a mere six weeks ago).

Due to the very reasonable price of the Glenfarclas 40-year-old, considering its age and class, this whisky is a great choice for the collector or the discerning sipper who can afford to salt away one or more bottles. Likewise, the Glenfarclas 25-year-old is a very special bottle indeed. Both offerings will eventually become the province of auctions with rather daunting price tags. By that time, they will have passed out of reach for most buyers. Get ’em while the gettin’ is good!

315
Shares
8.5k
Views
Share on FacebookShare on TwitterGet Our Newsletter
Read More Whiskey News
Whiskey Review: Jack Daniel’s Tennessee Taster’s Selection #6 Jamaican Allspice
Cheers to the Dads! Personalize a bottle of his favorite whiskey to create a modern gift for the modern man. Use code: FATHERSDAY20 for $20 off your next order of $100 or more at ReserveBar