For many people, the most important aspect of whiskey is its flavor. Whether it’s a spicy, herbaceous rye or a grainy Irish single malt, the flavor profile of our favorite libation is crucial for our enjoyment. However, a full appreciation of this spirit goes beyond its taste and smell to include its appearance.

As we all know, whiskey is usually brown, but how does whiskey achieve its dark complexion? Does that happen naturally? For the most part, the color of whiskey is determined by the aging process, as well as the level of char on the barrel it’s aged in. Simply put, the longer a spirit is aged, the browner it will be.

However, that is not always the case. Used barrels, for example, often fail to impart much color, a problem when consumers instinctively equate dark color with older age and bigger flavor. Many companies bridge that color gap by turning to good old fashioned science, and the addition of whiskey caramel coloring.

What is Whiskey Caramel Coloring?

For whiskey, caramel coloring is a product of burning sugars like fructose and glucose until they have turned into a beautiful, dark syrup. The most common version of caramel coloring is E150 (European nomenclature) or Class 1 (U.S. nomenclature). It is manufactured in the United States and Europe, and comes in four different classes (A through D). The type that is used most frequently for whiskey production is E150a, since it doesn’t have any harmful chemicals or residue such as sulfates or ammonium. 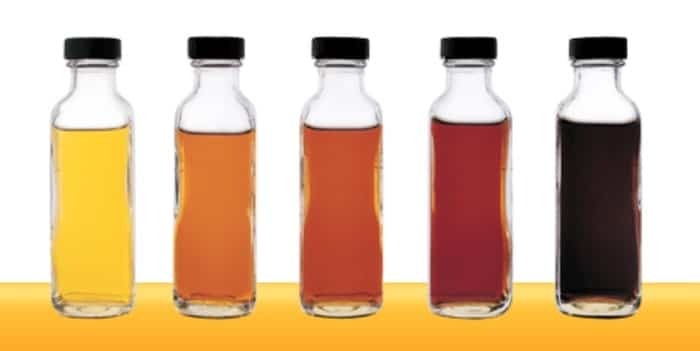 Why is Caramel Coloring Used?

The only reason companies use this color additive is for consistency between batches. For the most part, only a relatively small percentage is used, so there should not be an effect on flavor. However, some people insist that E150a affects the taste. Regardless, most brands that employ it use it for color, not flavor.

These days, it is mostly Scotch whisky that sees use of this additive. In fact, the Scotch Whiskey Act of 2009 stipulates that the only ingredients that can be added to the spirit are water and caramel coloring. Also according to this act, the amount of E150a cannot affect the overall flavor. Today, many Scotch producers seem to use this additive, with no signs of slowing down.

In America, however, the rules governing caramel coloring are a bit more complicated. According to the Alcohol and Tobacco Tax and Trade Bureau, some American whiskeys are allowed to add up to 2.5% of caramel coloring. However, this does not apply to bourbons that are labeled “straight,” meaning the color from straight bourbon must come only from the barrel, and not any additives.

So is caramel coloring a bad thing? Does it affect whiskey in any adverse way? For now, it seems that this additive is only harmful with regards to customer perception. Especially since many Scotches use it, it can give the appearance of reducing quality while still charging a premium. If you spend $100 on a high-quality bottle, you don’t necessarily want to know that the company added food coloring to make it look better. As far as taste is concerned, however, that doesn’t seem to be affected that much, despite the fact that some whiskey lovers may claim otherwise.

And if you want to avoid the controversy altogether, stick with straight American bourbons and you’ll do just fine.

128
Shares
13.5k
Views
Share on FacebookShare on TwitterGet Our Newsletter
Get The Macallan® Rare Cask at ReserveBar. Shop now!