Scottish independent bottler Wemyss Malts has announced a new version of its Nectar Grove expression, which we wrote about last year. The so-called “Batch Strength” release is a blend of highland scotch whiskies finished in Madeira wine casks.

Nectar Grove Batch Strength is the newest expression in Wemyss’s Batch Strength range, which includes three previous entries. “Batch strength” is not another term for cask or barrel strength; on its website, the company defines the range as “blended malt Scotch whisky, each bottled at the strength chosen to be ideal for the character of the individual limited edition of bottles.”

I’m not clear on exactly how that’s different from what any distillery does when they cut a whiskey down to proof before bottling, but in any case, Nectar Grove Batch Strength is bottled at 54% ABV, quite a bit hotter than the original release, which was sold at 46% ABV. 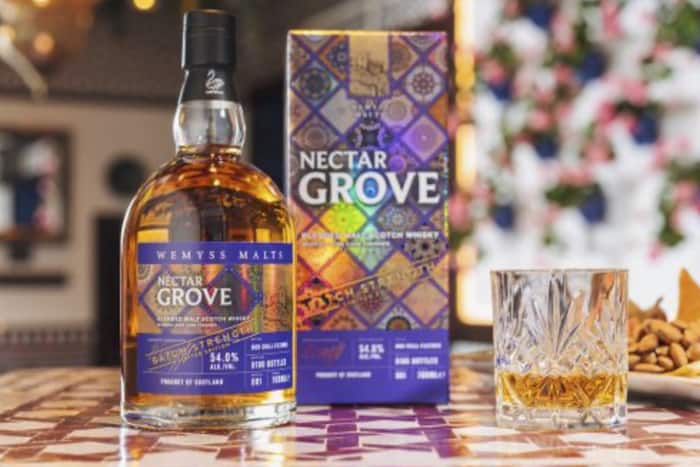 Wemyss says that’s “the strength found to best suit the moreish stone fruit and nutty flavours of this Highland blended malt” and calls the expression “an intensely fruity, sweet and indulgent malt whisky with a bright natural colour and an effervescent yet mouth-coating texture.” It is non-chill-filtered and free of added coloring.

“After the immensely positive feedback from our first ‘finished’ blended malt,” said founder and managing director William Wemyss in a prepared statement, “we decided that a batch strength version of this recipe would prove an interesting and provoking addition to the blended malt category as a whole.”

The new expression comes in a cool-looking remix of the original Nectar Grove packaging, which was inspired by the art of the island of Madeira—the new version is printed on a rainbow-hued “holographic” material.