After celebrating the 20th year of their launch last year, Scotch whisky brand Wemyss Malts opened 2021 recently with a milestone: the release of their first ever single malt whisky.

The Edinburgh, Scotland-based whisky purveyors debuted Untold Riches, a limited edition expression produced from unpeated single malt from Bunnahabhain Distillery that has been maturing in 31 hogshead and sherry butt casks for over 28 years.

According to the official statement announcing this release, “the launch of the Untold Riches marks the first time the blending team at Wemyss Malts have utilised the same repertoire of skills and expertise required to craft their exceptional blended malts to create a single malt. This unique Islay single malt utilizes their skill set and experience in careful cask selection and the considered art of blending.” 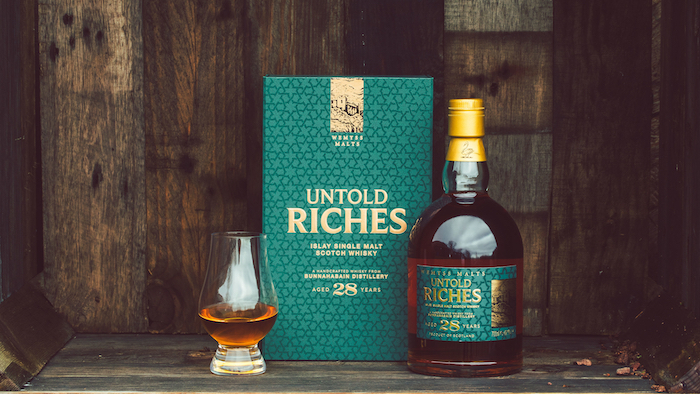 The release of Untold Riches comes along amid a busy period for Wemyss Malts. In 2019, they launched their Wemyss Malts Cask Club to allow whisky enthusiasts a shot at exclusive bottlings, news, and previews of new releases. And last year, during their 20th anniversary celebrations, they both relaunched their core range of whiskies with new bottle and label designs and offered limited releases including Black Gold 30 Year Old Bowmore single cask and Velvet Fig Aged 25 Year.

Untold Riches is now available directly from Wemyss Malts and will be on the shelves of retailers in the U.K., Europe, and Asia starting in February, with an SRP of £149.95 (about $206 USD). It is bottled at 49.1% ABV and both non-chill filtered and of natural color. Official tasting notes are below.