Torabhaig Single Malt From Isle Of Skye To Launch Next Year

The second legal distillery ever to be built on the Isle Skye in Scotland will soon release a rare new offering in the form of a peated single malt. What will be known as the Torabhaig Legacy Series 2017, bottled at 46%, will be a limited release, first edition bottling.

“By opening the second-ever licensed Single Malt Scotch Whisky distillery on the Isle of Skye we have from the start been mindful of the legacy we are leaving – it was never enough to make ‘just another whisky’., said Neil Mathieson, Chief Executive at Mossburn Distillers, the company behind Torabhaig, in a prepared statement. “We have created a characterful whisky with real depth and complexity, and an elegance and refinement which belies the extremely high phenol levels in the barley. 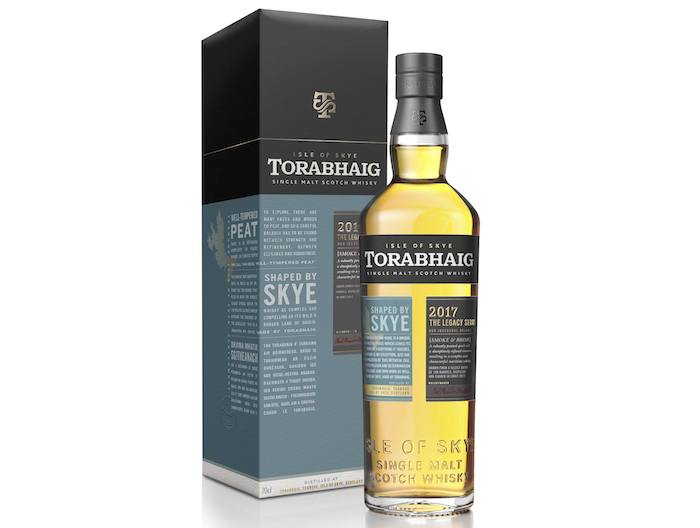 “It is a distinctive take on peat, and it is the first expression of our distillery’s signature style, a flavour profile we call Well-Tempered Peat, which we hope will help define the future of Torabhaig.”

Torabhaig prides itself on being a product of its surroundings and heritage. It is said it is shaped by the landscape and climate of the Isle of Skye.

“We first found the site as an abandoned but ruggedly handsome farm- steading, which just so happened to be the perfect location for a distillery,” noted Mathieson. “In testament to Hebridean pragmatism, the original buildings had been built using stone from the nearby ruins of Castle Camus. We saw it as our duty to preserve this history and bring the building back to life, to create something more than just a distillery.

“Over four years we painstakingly restored the derelict buildings, uncovering ever more history in the process, including the remains of an old mill wheel which we have refitted, and which is now powered by the cooling water from our stills. We are proud to have created our brand home with a true sense of place, now fully operational and ready to release our first Single Malt. Our tenacity and attention to detail is now to be 100% dedicated to making whisky.”

Production on this release started in January of 2017 with a team of nine distillers, many new to the industry. Torabhaig hopes to change the course of whisky-making on the island by bringing their own distinctive character.

Plans call for the first whisky to be released this coming February, priced at £50, or around $70 USD.

9
Shares
838
Views
Share on FacebookShare on TwitterGet Our Newsletter
Get The Macallan® Rare Cask at ReserveBar. Shop now!