The Tomatin distillery, over the years, has had a rather interesting, lightly peated Scotch single malt whisky series known as Cù Bòcan. Named after a rural Scottish legend, the design of the packaging went more towards something dark and scary. That’s changing now however with a relaunch of the product line and the addition of some new expressions.

The experimental Cù Bòcan Highland Single Malt series, according to those behind it, will continue to be distilled every winter in limited batches and made with lightly peated Scottish barley for its signature wisp of smoke in the flavor profile. Where things change though is the previously mentioned packaging and new core expressions. The latter breaks down into the Signature malt, matured in ex-bourbon, Oloroso sherry and North American virgin oak casks; Creation #1 matured in ex-Black Isle Brewery Imperial Stout and Bacalhôa Moscatel de Setúbal wine casks and Creation #2 matured in ex-Japanese Shochu and European virgin oak casks.

“Consumer testing feedback reaffirmed that the Cù Bòcan spirit was exceptional with powerful potential, but was telling the wrong story,” said Stephen Bremner, managing director of Tomatin, in a prepared statement. “We’re excited this new positioning puts the product back at the heart of Cù Bòcan to welcome people into the world of lightly peated whisky and the unusual finishes that lie within.” 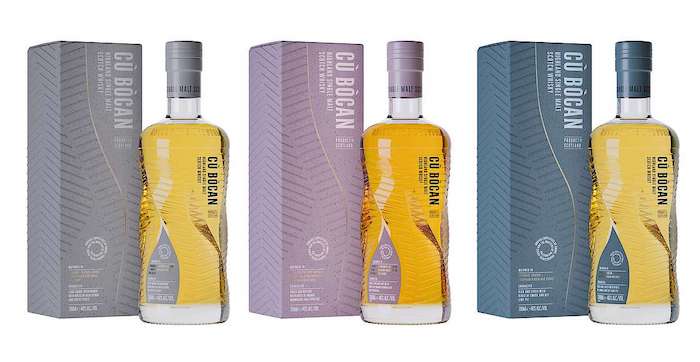 The relaunched Cù Bòcan line up (image via Tomatin)

As it stands now the new whiskies, each bottled at 46% ABV and both non-chill filtered and natural in color, are available at retail globally now. Price points are at £45 (around $55 USD) for the Signature and £60 (around $75 USD) for Creation #1 and #2.