Tomatin recently announced the launch of its final bottling in its French Collection of Scotch single malts, the Cognac Edition.

Distilled in 2008, the whisky began its maturation in traditional Scotch whisky oak casks before being moved into Cognac casks for the final stage of the process in November 2018. The bottling contains fresh fruit and floral flavors with subtle notes of lavender and Scottish heather, according to official tasting notes. On the palate, there are hints of cranberry, orange zest and rose water with spices. The French oak provides the expression with a finish which is long, with notes of Earl Gray tea and poached pears.

Previous releases in this collection have included whiskies finished in Monbazillac, Sauternes and Rivesaltes casks. 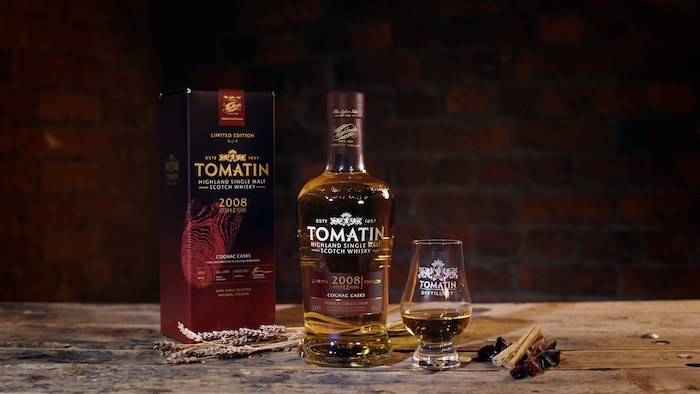 “The fourth and final release from Tomatin’s French Collection is the jewel in the crown. The Cognac Edition, along with the rest of the collection, showcases our innovative dedication to craft and excellence, and is the perfect illustration of the art of comparative final maturation; a concept championed by Tomatin in the Cuatro series released in 2014, which was also very well received,” Master Distiller Graham Eunson said in a prepared statement. “We have been overjoyed by the response from the whisky community to the earlier releases, and by introducing the Cognac finish as the final edition, we hope to attract a wider audience to our unique concept allowing them to better understand the art of cask maturation.”

The Cognac Edition (botted at 46%) is retailed at £65 and is available now, alongside the rest of the French Collection, through specialist whisky retailers worldwide and directly from the Tomatin website.