The Pattison Crash: A Dark Chapter in Whisky History 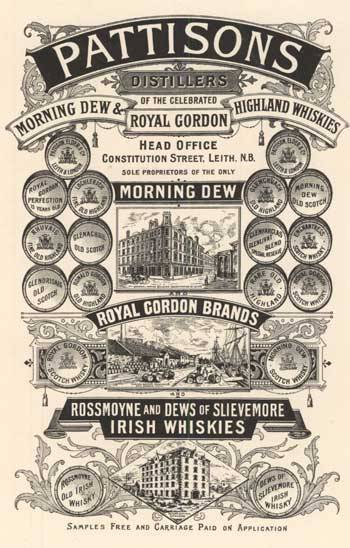 Image via the National Library of Scotland

If you’ve been following whiskey for a long time, you know that prices have gone up – way up. Not that long ago, spending more than $50 on a bottle of bourbon seemed a little silly; these days, it’s commonplace. And Scotch is even more expensive – but it wasn’t always that way. Scotch whisky has gone through several boom-bust cycles, with prices high when the industry was firing on all cylinders and low during contractions.

The Pattison Crash was a major contraction in the late 19th and early 20th century, and one whose implications were felt for decades as the industry struggled to recover from the massive closings it entailed. Here’s what happened:

By the last decade of the 1800s, investment in whisky had become very trendy, and many entrepreneurs were asking for – and receiving – huge loans to purchase Scotch whisky stocks as a business investment. Those loans were, of course, secured by the whisky stocks – but most were sure that the whisky would only continue increasing in value. What could possibly go wrong?

A lot, it turns out. In the early 20th century, times got tough for Scottish distillers and independent bottlers. Shady financial practices by independent bottlers became commonplace. One such bottler – Pattison, Elder & Company – was particularly brazen. The owners of this highly successful firm were “noted for their personal extravagance and flamboyance” reports whisky historian Gavin D. Smith, and resorted to underhanded tactics to inflate the value of their stock and their assets. When their firm declared bankruptcy in 1896, ten other companies they had done business with failed alongside them.

The “Pattison Crash,” as it came to be known, initiated a softening in whisky prices and triggered a cascade of closures, contractions, and output reductions throughout the Scottish whisky industry. In 1906, production had dropped below 24 million gallons, a reduction of nearly one-third in just nine years.

The Pattison Crash was just the beginning of some tough times for the Scotch industry. World War I came hot on its heels, followed by U.S. Prohibition and then World War II. Yet the industry survived, and today we’re in another boom – one we’re hoping endures for a long time.

0
Shares
2.2k
Views
Share on FacebookShare on TwitterGet Our Newsletter
Get The Glenlivet 18 Year Old at ReserveBar. Shop now!