The Macallan ‘Concept No. 3’ Releases As Last In This Collaborative Series

The Macallan recently launched “Concept No. 3,” a collaboration with iconic graphic designer David Carson, bringing together whisky and the visual arts.

Concept No. 3 is the latest release in The Macallan’s Concept Series, a limited collection of annual-release whiskies highlighting the artistry behind The Macallan’s whisky-making with creativity and culture.

For the third and final expression in the series, The Macallan turned to American graphic designer David Carson. A native Texan, Carson, who is also a professional surfer, began his creative career as a magazine designer. In the ‘90s, he became art director of the magazine Ray Gun, where his experimental page layouts and pioneering use of typography helped evolve the field of graphic design. 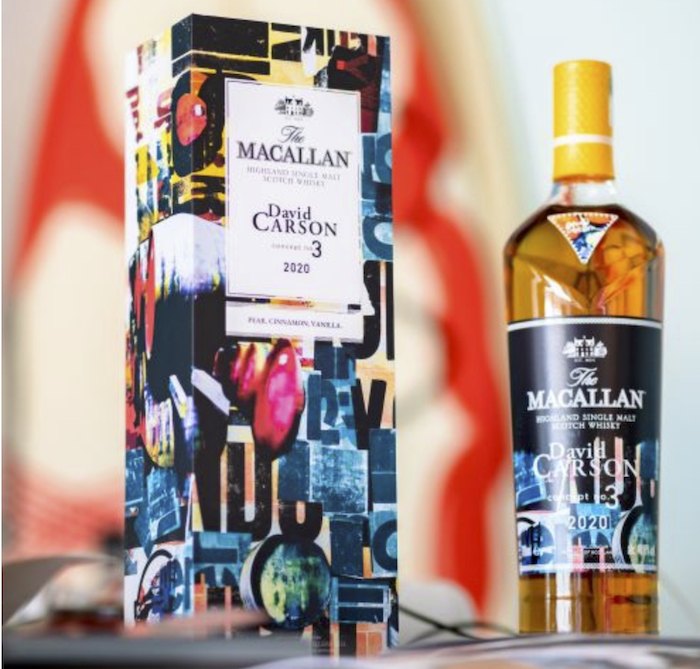 Concept No. 3 is the latest project in a wider collaboration between The Macallan and Carson, who produced a festive campaign for the brand last year.

To bring his unique perspective to the design of Concept No. 3, David visited The Macallan’s 485-acre estate in Scotland’s Speyside where he spent time with The Macallan Whisky Maker Polly Logan.

His unique, handmade collage designs for Concept No. 3 feature special touches to celebrate a shared outlook and methodology – including the incorporation of the letter P for Polly. Many of the colors used are also those found at The Macallan Estate, with blue representing the River Spey and red reflecting The Macallan’s sherry-seasoned oak casks.

Polly, when crafting Concept No. 3, created what’s said to be an unusually fresh whisky, with a warm, golden hue that pays tribute to “the graphic designer’s years on America’s West Coast” during his long career.

The ABV of the whisky was developed specifically to be 40.8%, after the pair realized that eight is their favorite number.

“In some of The Macallan work, I very noticeably got into what I call ‘my zone’, where I was just clicking. It was all coming together so I’m not aware of time, or even where I am,” Carson said in a prepared statement. “The Macallan people I’ve dealt with have been so open to exploring new ideas and to different types of creativity. Their obvious love for nature and where they work, the hand-doneness and the wooden casks – you have so much of that with The Macallan collaboration and I am very proud of it.”

Logan said it was a joy to work with Carson on the creation of Concept No. 3. “I was deeply inspired by his vibrancy, and drew on this to create a bright, fresh whisky. Its pale yellow color, which we’ve named Californian Gold, reflects David’s sun-soaked days as a surfer and it also reveals the citrus notes which shine through.”

Concept No. 3 was crafted to deliver what’s said to be complexity from predominantly first-fill sherry seasoned American oak casks that deliver a sweetness and spice, enhanced by a selection of European oak casks to add depth and richness. Balance and freshness are achieved by specially selected refill and virgin oak casks.

Encased in a bespoke presentation box featuring Carson’s designs for Concept No. 3, each bottle also features labelling designed by Carson along with a vibrant chevron symbol bearing his signature.